Despite the fact it’s mid-March, there was snow to be seen in some parts of Yorkshire yesterday. Not our part, alas – and it always feels like you’ve been a bit short-changed when it’s cold enough to snow but you don’t actually get any.

Nonetheless, this is just an excuse to segue nicely into a trio of finished objects that were actually finished during the Christmas break. I have no excuse for having not shown them off earlier other than what appears to be the unplanned blogging hiatus that I seem to have taken. Life just does take over sometimes and I’ve found it tricky enough to keep up with everything in my RSS feeds, never mind writing content of my own.

Without further ado, to the finished objects!

I purchased the yarn for Kate Davies Snawheid and matching Snawpaws sometime around Christmas 2012. I bought some lovely Excelana yarn (one of the recommend yarns for the patterns) from Baa Ram Ewe in Headingley. I almost never use the recommended yarn but I was after a proper, woolly yarn and hadn’t yet tried Excelana so it worked out perfectly. I dithered for ages in the shop over whether to get the red or blue as the main colour. At times like this I’m very glad to have Trev handy to make the decision for me. 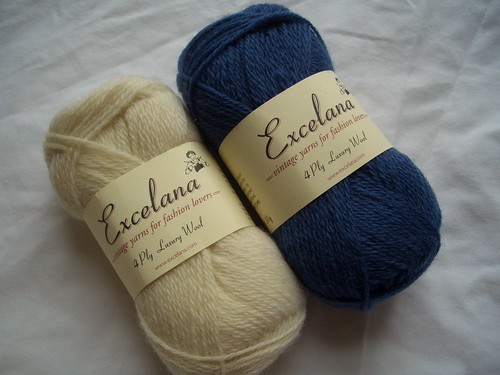 Even getting started was a bit of an undertaking. I wanted to do the mitts first, to act as the swatch for my hat. A number of people noted that the hat ran small and I have a big head. The last thing you want is to spend all that time knitting a colour work hat and for it not to fit.

I also wanted to alter the mitts quite significantly from the original pattern. I wanted a proper thumb gusset as afterthought thumbs don’t fit me at all well. I wanted to combine both the mitt and mitten into a convertible flip-top number for maximum warmth and utility. And for added awesomeness and the elimination of needing to remove the mittens to use your phone, I wanted to add thumb slits.

How did we do? 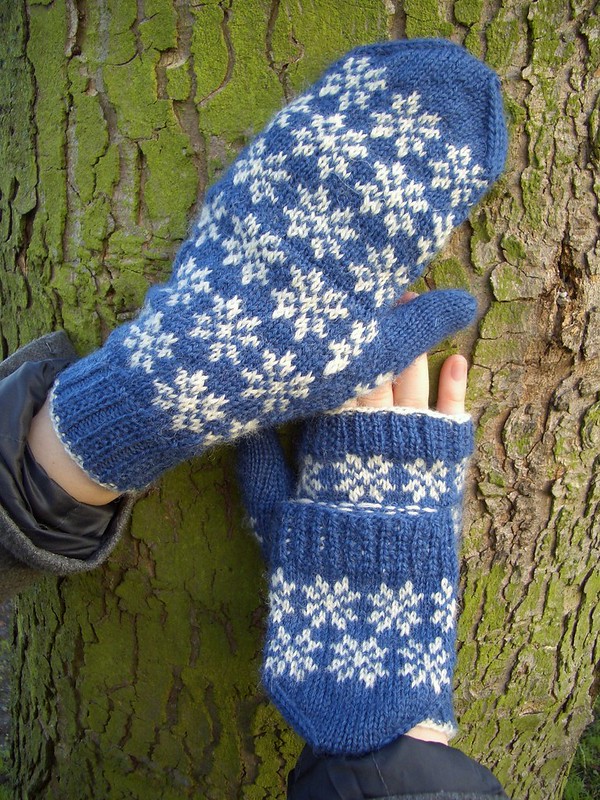 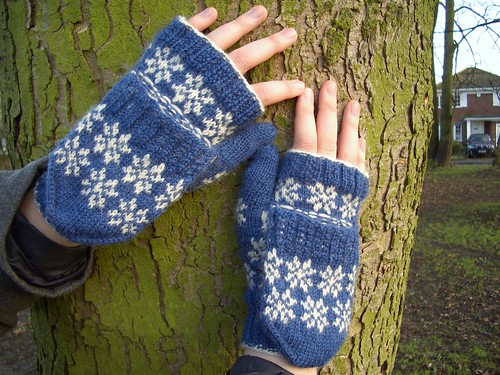 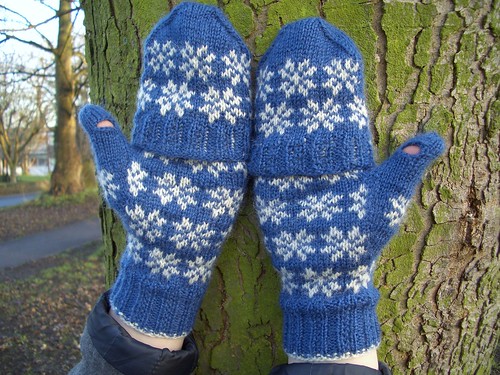 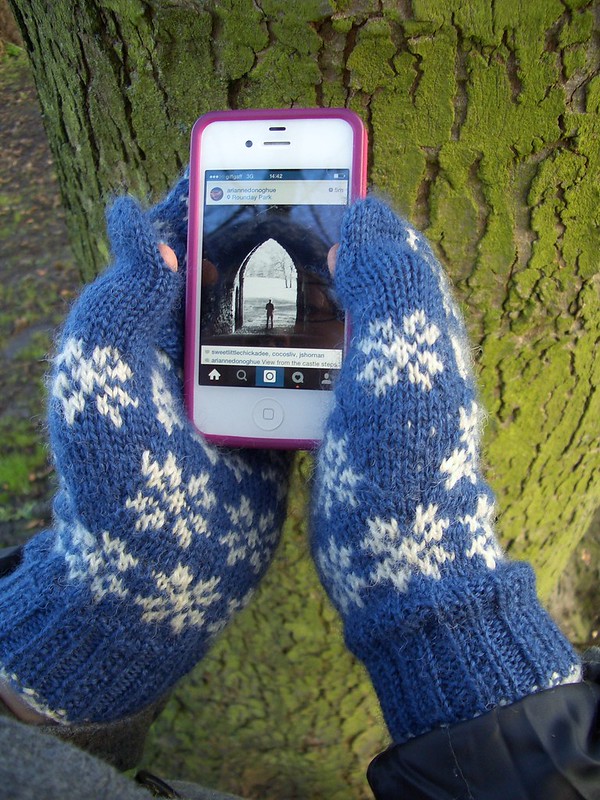 And here’s a good close up of that gusset with added snowflake: 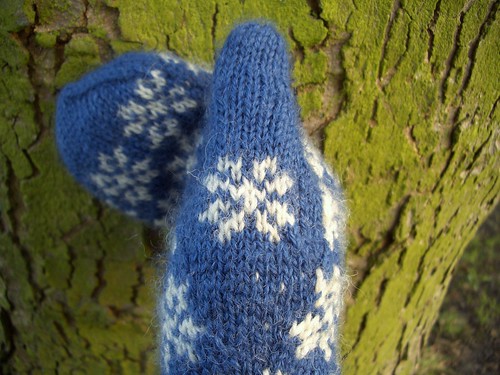 I’d say I did pretty good! Ticked all the boxes of what I wanted them to achieve although clearly some of my details could be better. I used an entire ball of blue yarn and just under half a ball of white.

Here’s more detail on my mods:

• Went up a needle size for both ribbing and main pattern

• Started thumb gusset on row 11, inserting increases either side of the final stitch and separating these from the hand stitches with a marker

• Added a single snowflake for interest on the thumb gusset. On the right hand mitten it’s dead centre – the left hand one is a bit skewiff

• Once I had 19 sts, put them on waste yarn and cast on 4 sts to help cover the gap. These 4 sts are then decreased out over the next few rows to return the stitch count to normal

• K2tog every st around, then knit a row plain.

Figuring out how to cast on for the white for the flip-top was a major pain. On reflection, I should have cut the white and joined it back in again. Trying to float it around the palm for ten rows has led to the ribbing being rather inelastic. I may yet cut the floats and weave them in.

Some of my floats across the thumb gusset aren’t great either – you can see lots of white peeking out in several places.

However, for a first attempt, not bad.

Now on to the hat!

I knew I wanted a giant pompom. The pattern includes one and I bought a special pompom maker just for this project. I managed to make one that used up 30g of yarn: 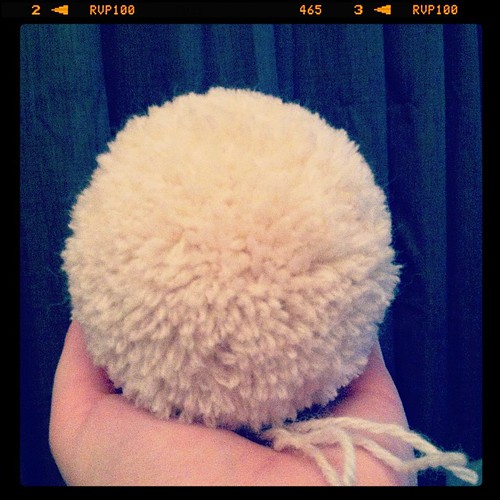 Not perfectly even mind you, but oh so good and woolly.

I went up a needle size for both ribbing and main body of the hat, as per the mittens.

Also tried to knit as loosely as possible with the colourwork to make it easier for the hat to fit my giant heid!

It turned out to be a Pretty quick knit – helped by being off work and multiple movie marathons in the background 🙂 I think over Christmas we watched ALL the Marvel movies in the course of 36 hours, plus Frozen several times and other guilty pleasures such as Enchanted: 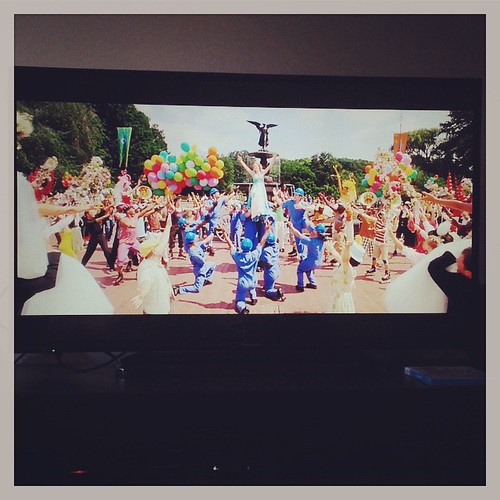 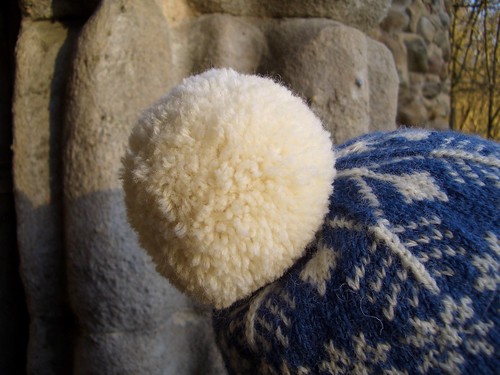 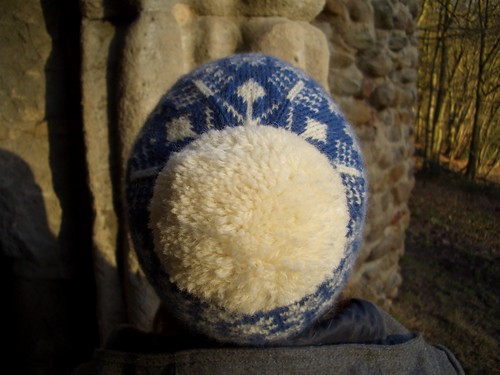 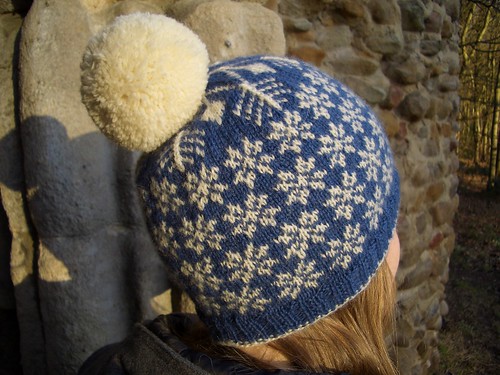 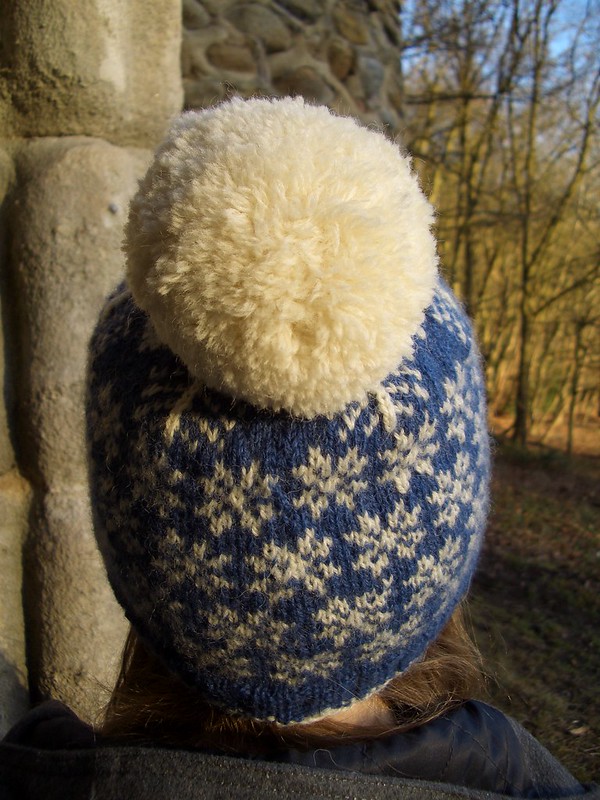 I have so much love for this hat. I was worried about it being too short/small but it is probably a tiny fraction too long. But it covers my ears and eyebrows nicely and is a dream to wear on winter days. Every time we’ve had snow since Christmas I wear it out of the house on my walk to work and trips around the park – lovely and toasty.

There are some good walks near where we live. We are just around the corner from Roundhay Park which looks lovely even in the winter: 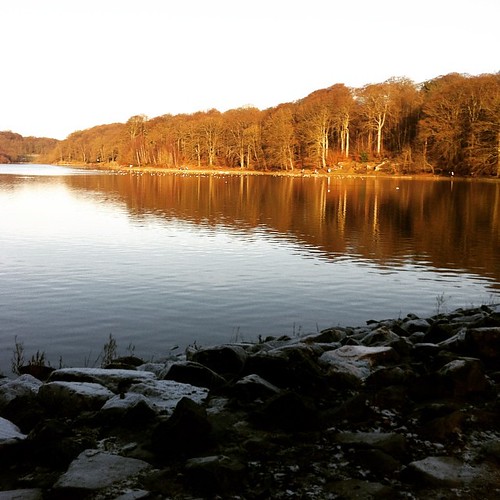 It also features its very own castle which was the backdrop for the photo shoot: 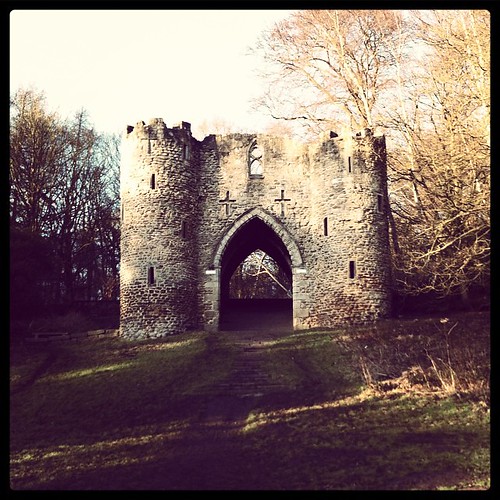 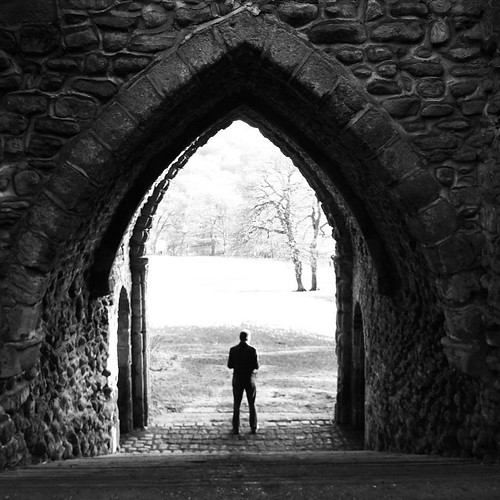 Full notes are available on Ravelry for the hat here and the mittens here.

Plenty more updates to come hopefully. While I’ve not been doing much knitting recently as I’ve not really been in the mood for any crafting and when I have, I’ve been mostly spinning and sewing. Nonetheless there’s still a bit to share.

Anyone being blessed/cursed with any snow at the moment?