This dress has been a long time in the posting. I actually finished it way before we moved, in October last year. Slowly but surely we’ll catch up on all of these FOs and I can find that lost mojo!

During last year, Colette brought out their new guide to sewing knits and three new knit patterns – Moneta and Myrtle which are both knit dresses and Mabel which is a nice quick knit skirt. I bought all of the patterns and the book – I fairly quickly started on both a Moneta and a Mabel which I’ve since finished.

My plan for the Moneta was stripes. I had some suitable black/grey lightweight knit fabric which I affectionately refer to as my “prison stripes”. You’ll see why. Having made a few knit tops before, I knew that I would need to apply an FBA – even though Colette draft for a C cup, I am significantly larger than that and I didn’t want too much unsightly stretching/pulling from the armpit. 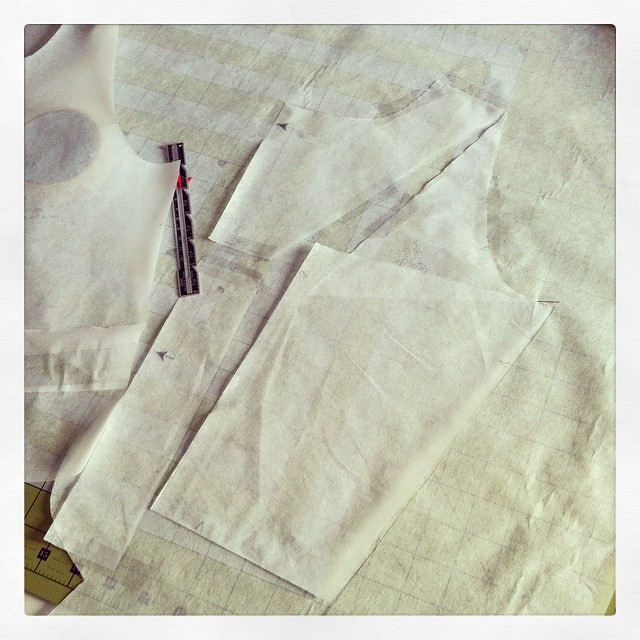 Typically, writing this post so late on, I can’t actually remember which tutorial, or combo of tutorials I used to draft the FBA, but I think I added 1.5″, for a total increase of 3 inches across the bust. I also added an extra inch to the length of the bodice as I thought I’d need the extra room. Here’s the finished bodice, sans skirt: 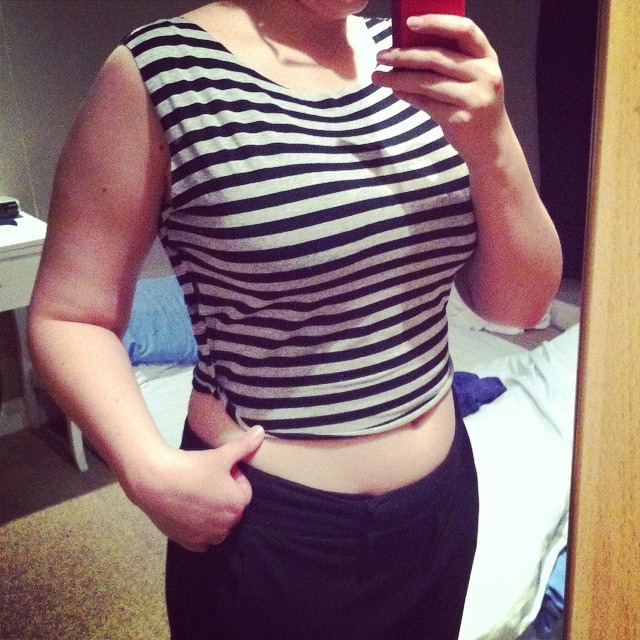 Pretty happy with where the waist hits and not much in the way of pulling across the bust either! As it was only a muslin i didn’t worry too much about stripes when cutting it out. I did want to do some basic stripe matching, but even with a rotary cutter this stuff shifted around so much on the table. Also if I’m being honest, I didn’t do the best job of sewing it up – which makes it a little hard to know whether some of the issues you’ll see in the pictures are down to pattern fit, dodgy cutting, or bad sewing.

Without further ado, here we are! 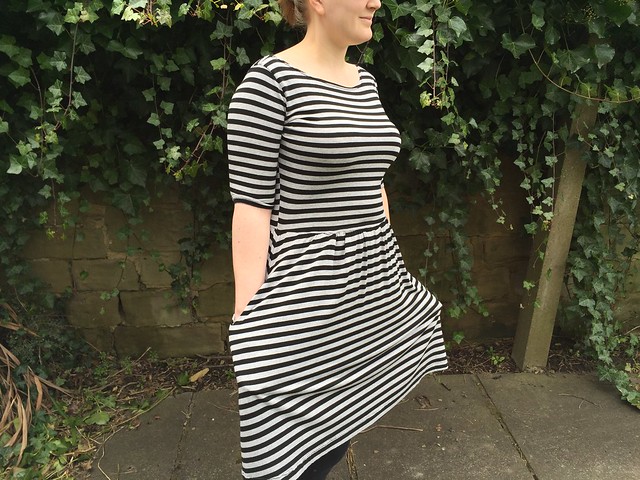 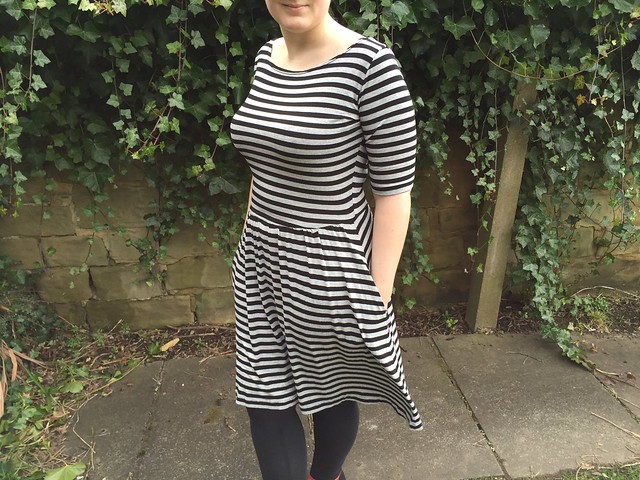 Not too bad right? You see what I mean about the prison stripes? 🙂

Now from the front: 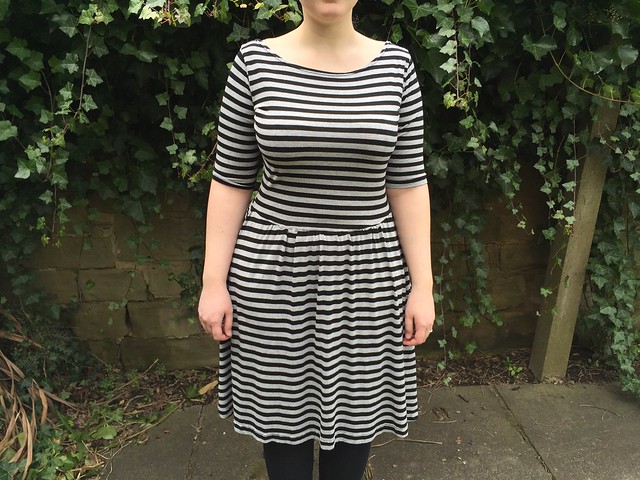 I suspect I am standing on a slope here or something as both I and the stripes look distinctly lop-sided. It also become quite apparent I think, that adding the extra 1 inch to the bodice was a mistake. While it was a good length before the skirt was attached, the weight of the fabric stretches the bodice a bit and makes the waist hit lower than I wanted. The next time I made one, I’ll remove the extra inch. 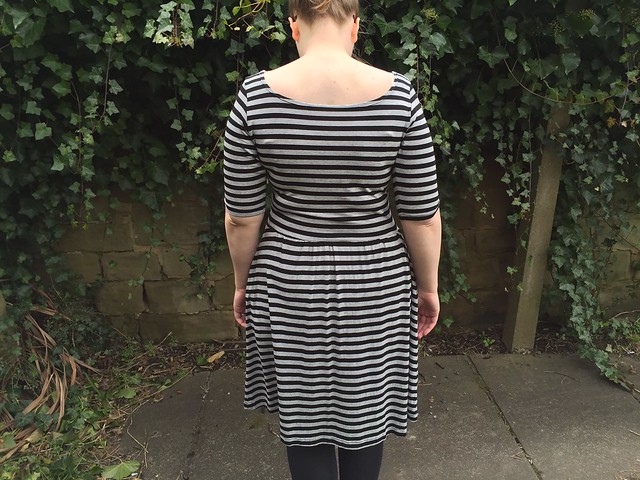 Quite a lot of excess fabric there in the back. I’m still unsure whether it’s because I have a sway back, or because my waist goes out quite sharply to my hips – fabric just sits there as it can’t hang properly. Still, removing the spare inch should help here.

The neckline at the back goes quite low – it scoops even lower than the front: 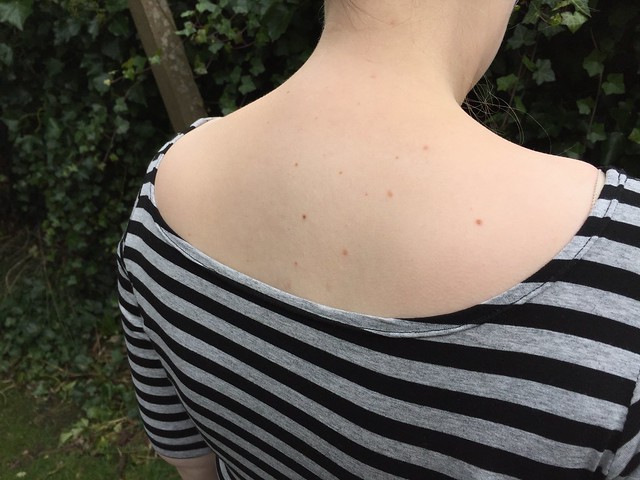 Generally I like how it fits – although it makes me realise that I’m really moley! I seem to be getting molier with age 😀

From the front, I also think it looks ok: 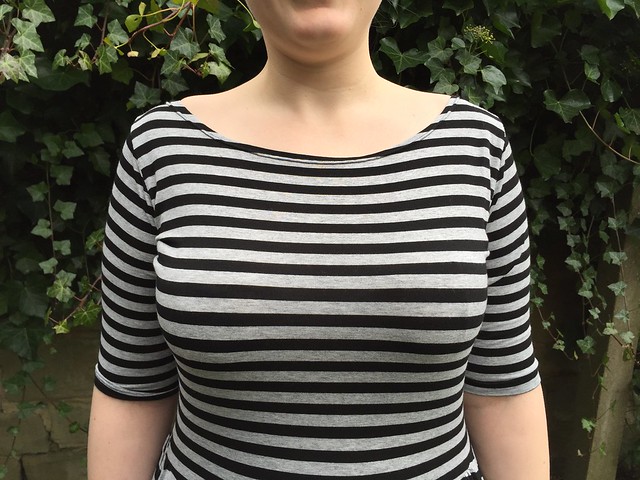 My sewing machine and I did have an epic falling out when I had to use my twin needle to sew the neckline. 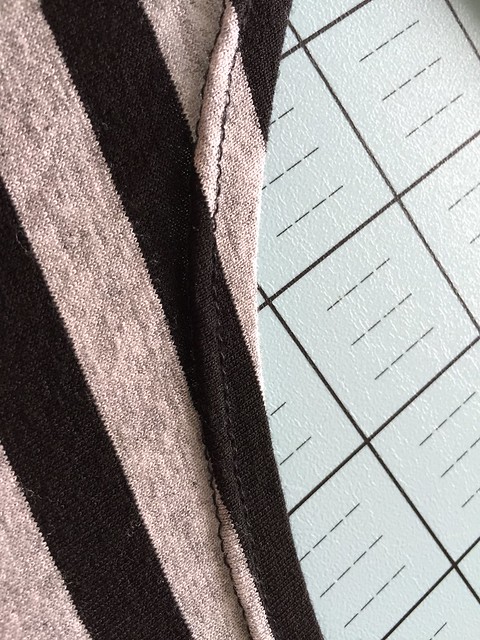 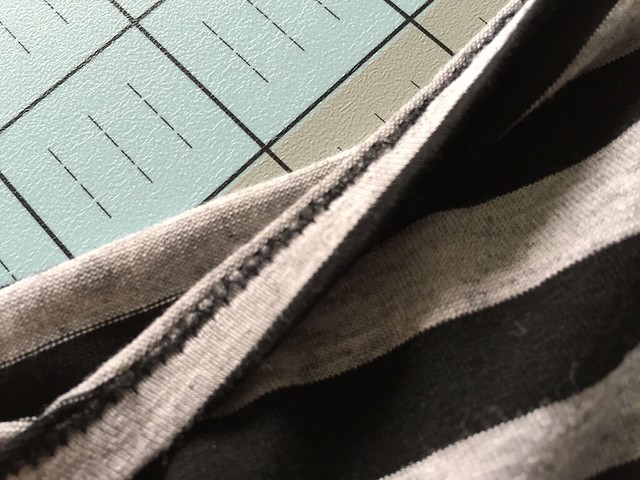 It just wouldn’t sew properly. The neckline was still far too stretchy even with the stitching all in place and the hem was the same. But as long as I don’t pull it about too much, I think it’s all ok.

Less ok is the gathering I did at the waist – I did struggle a bit with the elastic but I think it will be easier next time. As a result my gathers aren’t even so it does fit a little weirdly on the hips. 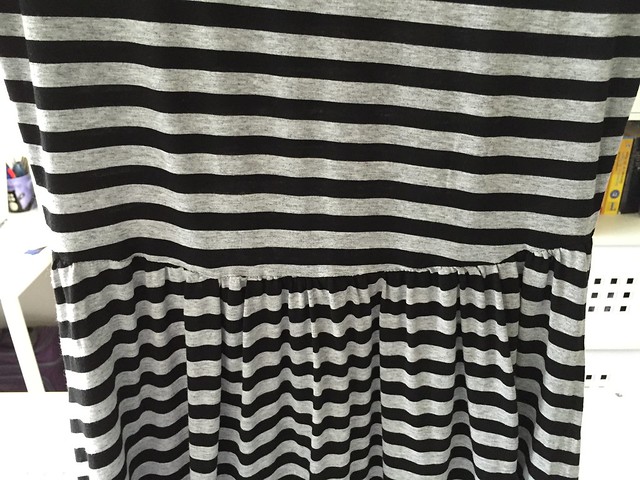 Overall though, I like the dress. While pockets in a knit are useless for storing things in, I do like having somewhere to put my hands. I plan to buy a couple of brightly coloured belts and then I think I might actually wear this dress out of the house! A wide enough belt will hide the dodgy waistline length and my poor gathering.

So, time for your feedback – do you think a belt will hide a multitude of sins, or is it too like prison clothing to wear out in public? 🙂

I have a navy polka dot and a white/blue breton stripe dress planned. Excited to finish those and wear them in time for summer!