After having made a couple of shirts for Trev (Colette Negroni 1 and Negroni 2) I thought it was about time that I made one for myself. All over the internet I’ve been seeing people post pictures of the Grainline Archer shirt and there’s definitely a big casual-shirt-shaped hole in my wardrobe!

Going back a little over a year now I bought some suitable fabric from a haul at Fabworks – it’s peeking out at the bottom of the pile here: 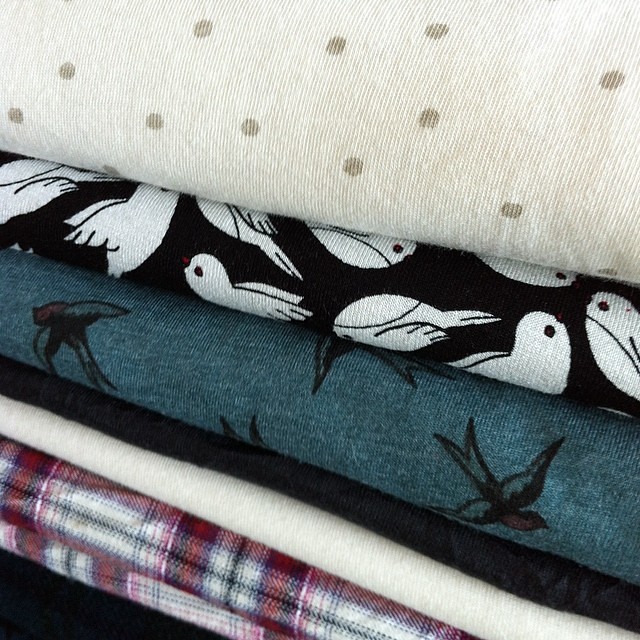 I purchased my pattern and duly got to cutting out and taping together all the little pieces (boy it takes ages!) 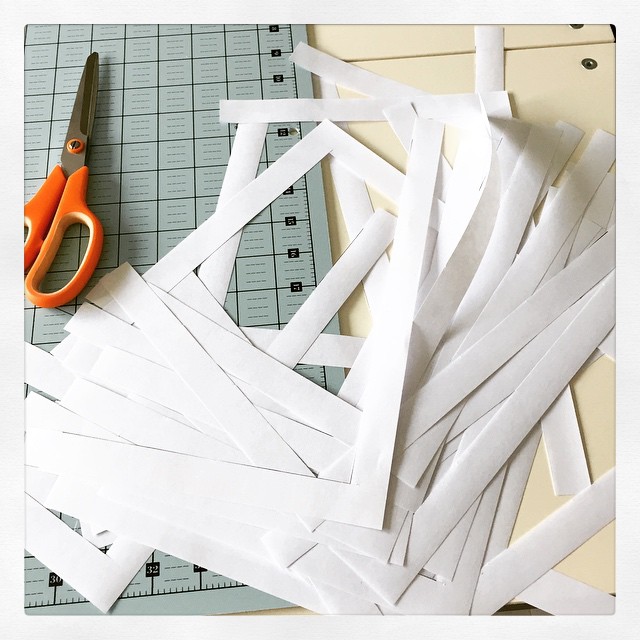 After doing this I absolutely get why people choose to spend the extra on buying tissue patterns rather than downloadable – although after a while I find it a bit soothing! Ironically, the Archer was available as a printed pattern shortly after I printed out mine and stuf it all together – isn’t that always the way? 🙂

Eventually we got to the part where I get to cut out the fabric and I found this: 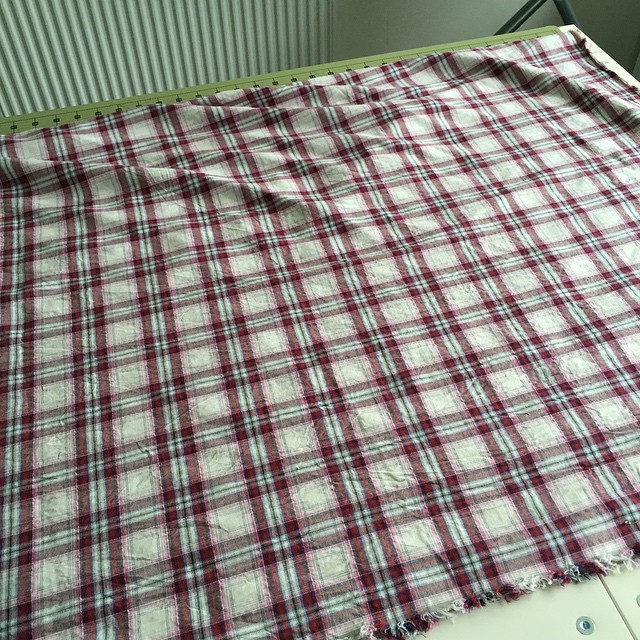 Horribly off-grain! I really wanted to try and make the stripes match up at the seams and no matter how I pinned the pieces I couldn’t get things to line up 😦 Much time and effort later, I pinned the two layers of fabric together, matching up the intersections of the checks. It took AGEEEES. BUT! After much time, effort and mild cursing, we ended up with this: 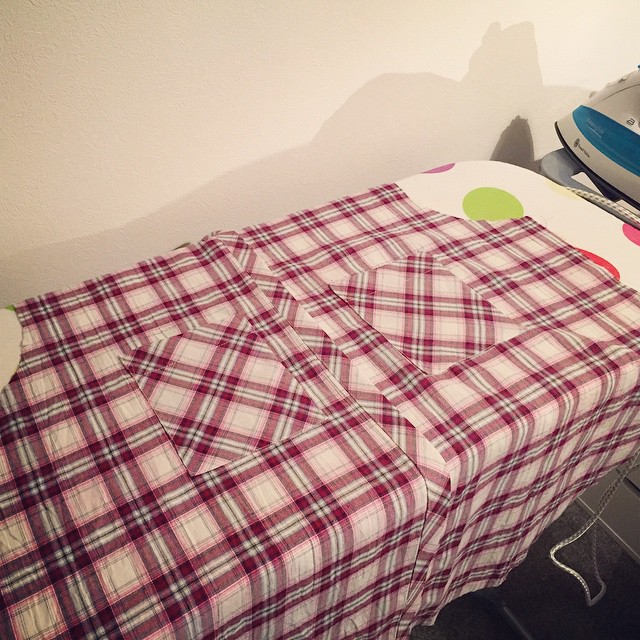 So pleased I could burst! It definitely looked like it had the makings of becoming a shirt. Eventually. After much sewing and faffing and occasional head-scratching when reading the instructions, we have a finished shirt: 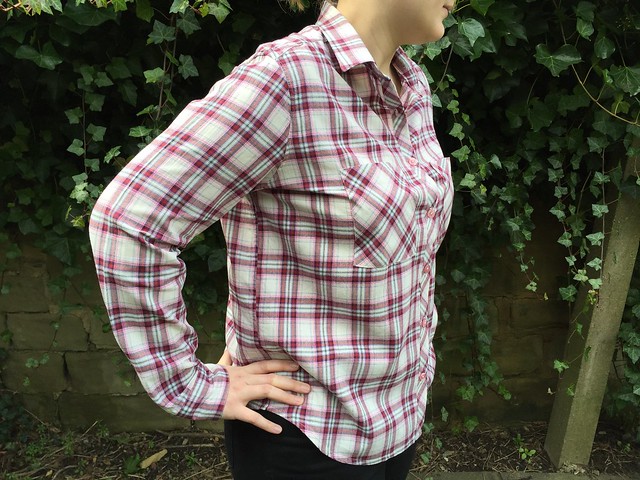 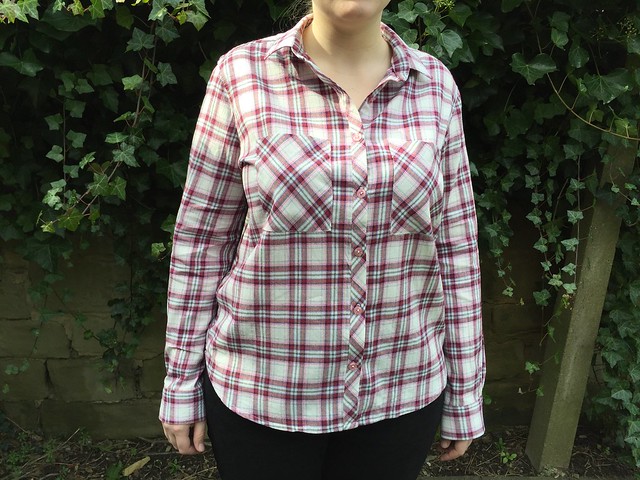 I’ve managed to do a pretty good job of matching the stripes up across the front which I’m so so pleased about, especially considering the drama I had with the fabric being so skewed. 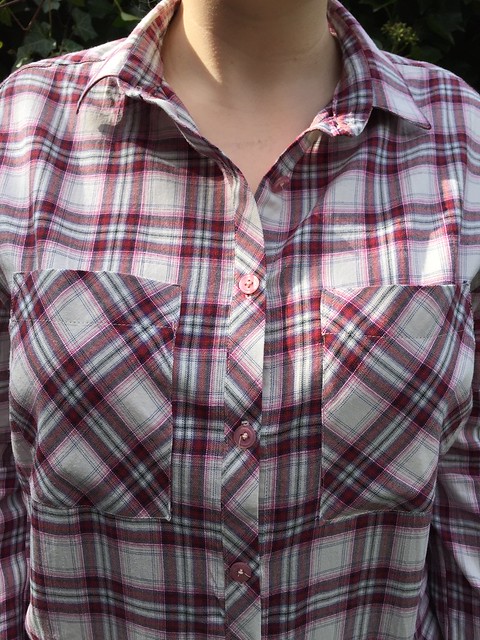 From the back it also looks ok. It could be much better as the vertical stripe on the collar isn’t central and the print on the yoke isn’t central either. It’s not a massive deal, but does bother me a bit. Definitely something I’d like to do better with next time. 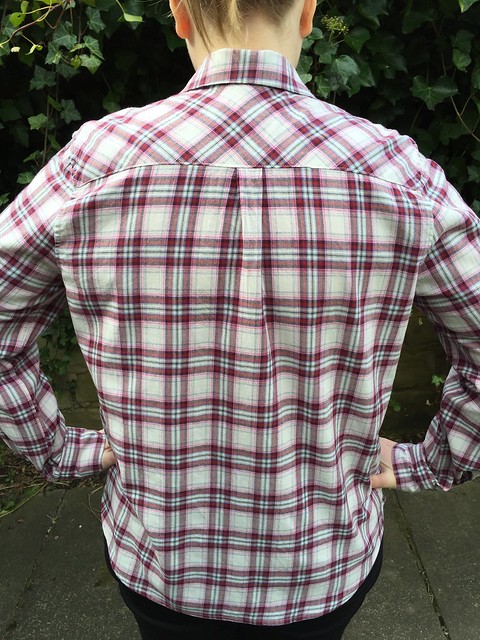 Shape-wise, I think the shirt looks pretty baggy on me. In terms of size, I went with my body measurements and did an FBA to add extra room across the chest, but around my waist and lower back it looks ultra-baggy and boxy. I know a lot of this is style of the shirt and my suspected sway-back won’t be helping things. I think it looks really baggy from the front too which when you’re larger size like I am, isn’t particularly flattering. I could adapt the shirt further to remove some of the ease from the waist, but then I feel like I’m trying to turn the pattern into something it isn’t. Do you know what I mean? 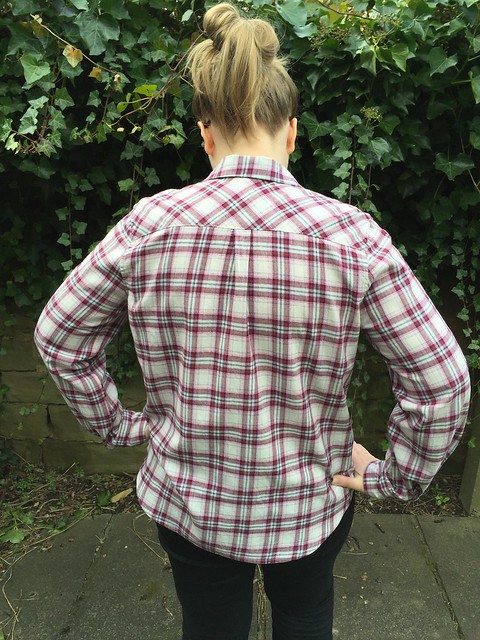 Unfortunately I have to wear a camisole with the top, because otherwise, THIS happens! 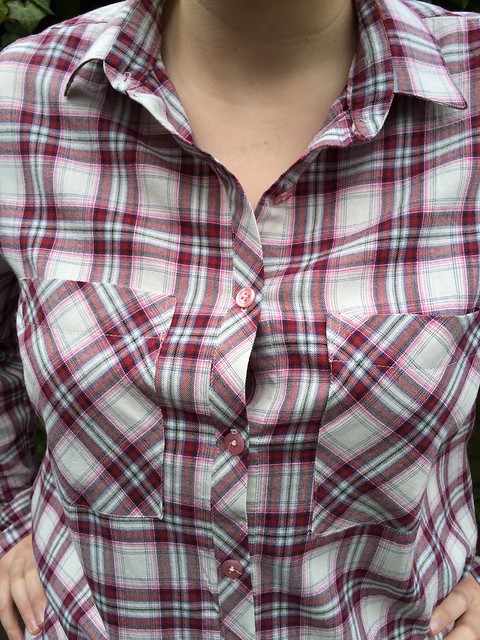 It could be poor button placement (perhaps I should have had more buttons spaced closer together) or having added not quite enough room to the FBA, but generally this doesn’t happen if I wear something underneath – so at least there’s no chance of indecently exposing myself.

Now for some of the details of the shirt!

Stripe matching looks pretty good – so does pocket placement until you look too closely and realise they’re at different heights… oopsie. Not convinced that large pockets like this belong on a shirt that will be worn over a large bosom, but that’s something else to test on future garments. 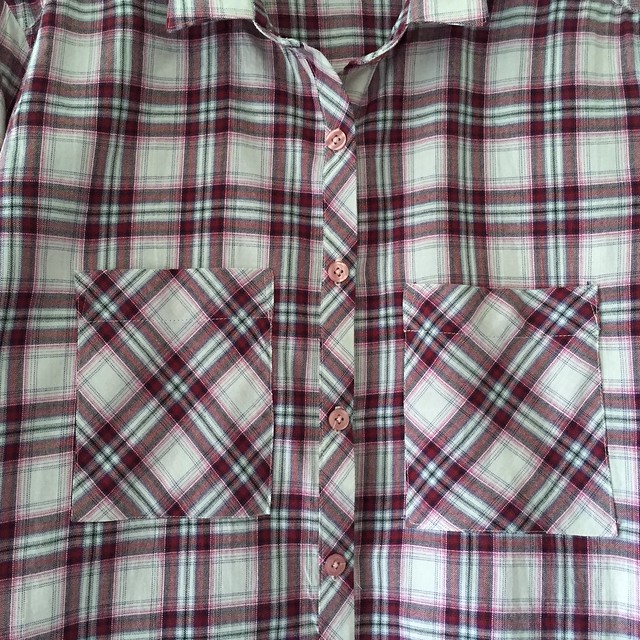 Inside the shirt there are no raw seams anywhere. All side, shoulder and sleeve seams were flat-felled as I love the look of them and think it makes for a more durable shirt. You never tend to see them on ladieswear despite them being fairly standard on men’s shirts. I don’t understand why this is but perhaps the general standard of RTW shirts is higher for men? 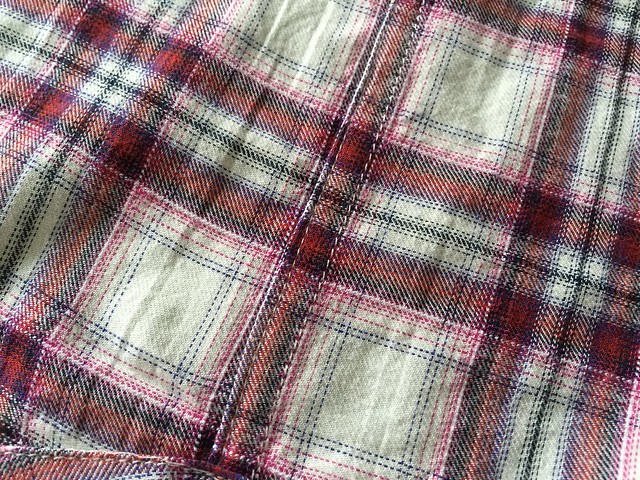 This shot lets you see the shirt from the inside – all enclosed seams. On the right you can see some brilliant stripe-matching at the side seam – on the left, less so. But still definitely within the boundaries of what would be acceptable if I bought a shirt from a shop. 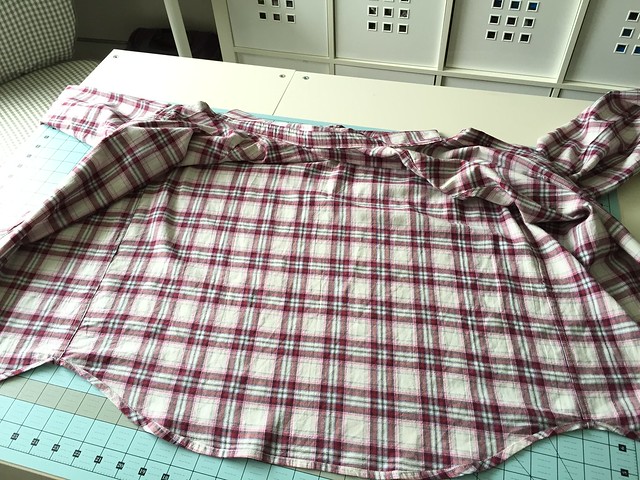 Where I really struggled, was the collar. While the plackets and sleeve cuffs were tricky and not enjoyable, the collar was my nemesis. I followed the instructions in the pattern and from the Archer Sewalong on the Grainline site and I still feel like the collar is a massive dog’s dinner. Luckily the pattern of the plaid helps to hide it, but it’s pretty dreadful. Lumpy, bits sticking out and random stitches everywhere. Definitely more work needed there. 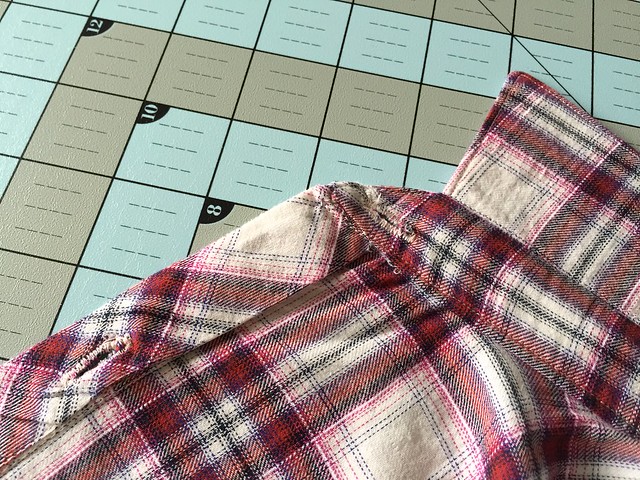 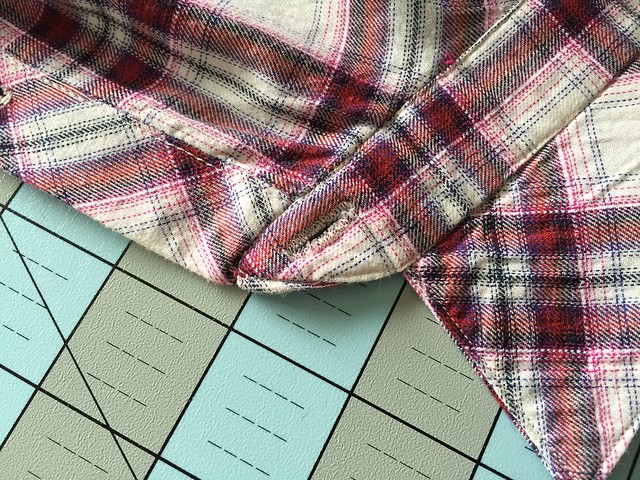 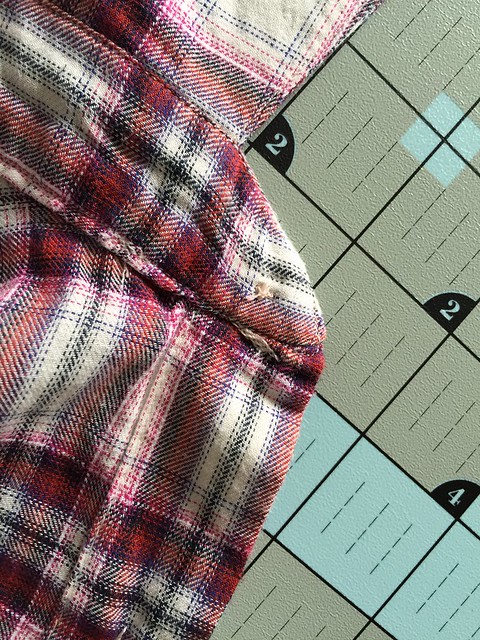 Most of my top-stitching looked pretty good! My Singer 201k does sew beautiful stitches but with only using the standard foot it’s perhaps not quite as close to the edge as I would have liked. That being said, it doesn’t look that dissimilar to what I’ve seen on some RTW shirts, so perhaps I need to give myself a break. 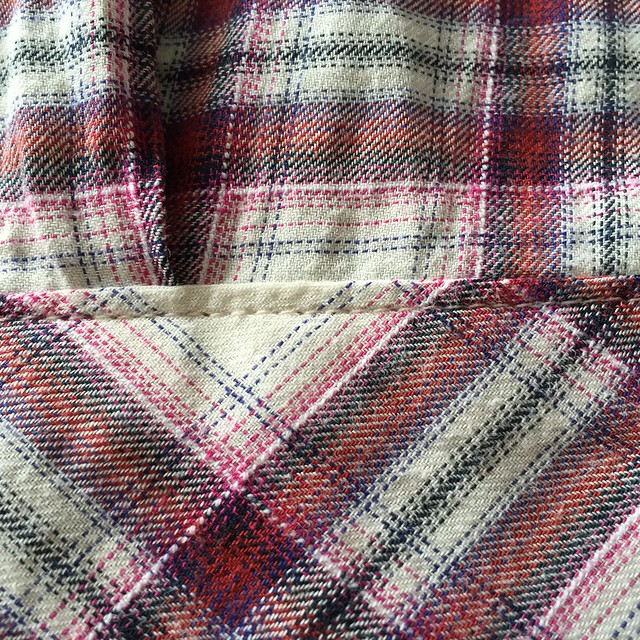 As a side note, I decided to sew the entire shirt (bar attaching the buttons) on my 201k handcrank, which had recently returned from a service and so sews beautifully. When all you want is a straight stitch, which is basically it on a shirt and you need tiny, fine stitches, there’s not much that can match the best machine Singer ever made. 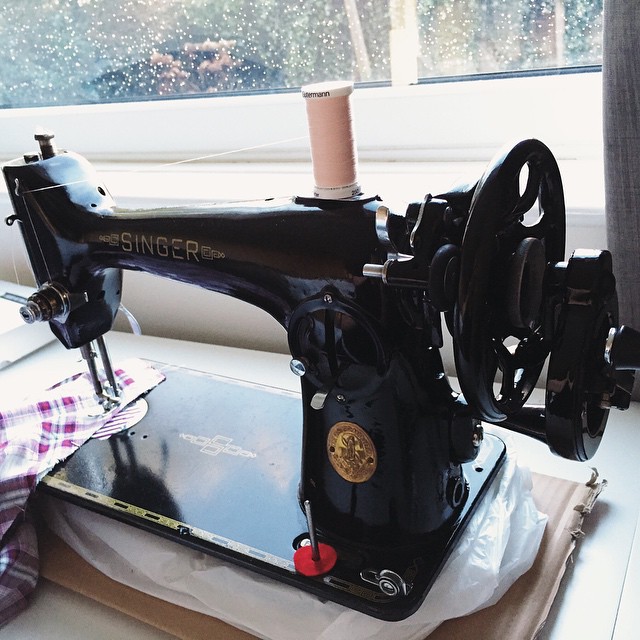 To sew the buttonholes, I used my vintage buttonholer attachment which I think did an excellent job. Needless to say you’re essentially sewing the whole shirt one-handed and I definitely miss some of the little feet and accessories that make things like top-stitching easier and more accurate, but it’s a great way to improve your skills as you’re having to do it all yourself.

As I alluded to further up I’m not convinced the Archer is the best pattern for someone of my size – I think it would work better if I didn’t have to try and accomodate my bust, particularly as the pattern isn’t darted. If I was to try and make all of the changes I wanted to do to make it “fit” better, I think it would cease to be an Archer and would have morphed into something else entirely. I’ve got the Granville and Oakridge patterns from Sewaholic that I plan to try which I think will yield a better result on me. Not that I think this looks deadful, but it is a bit tent-like and is definitely adding to my current hang-ups about my body – part of why this post has taken so long to put together.

But on the plus side, yay for a finished shirt and here’s to many more!