The blog has been a bit dirge-like recently. So to brighten things up, before we embark on the story of all of my recent-makes-gone-wrong (although I did just yesterday finish a shirt for T that’s pretty ok!) I thought it’d be nice to talk about something positive.

We begin our story in May. Imagine, an airplane: 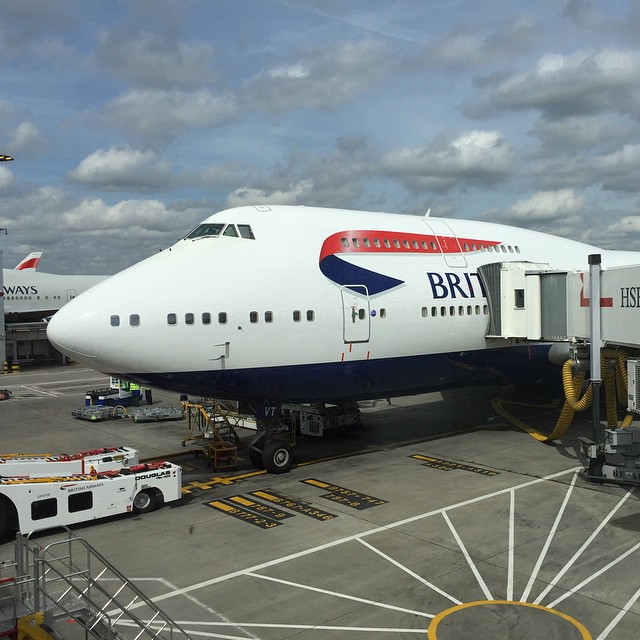 Many flying hours, work-related meetings and adjusting-to-being-in-the-USA-for-the-first-time-ever later, I wound up with the lovely Rock & Purl (who had flown out from Sacramento to meet me) at Fancy Tiger Crafts in Denver: 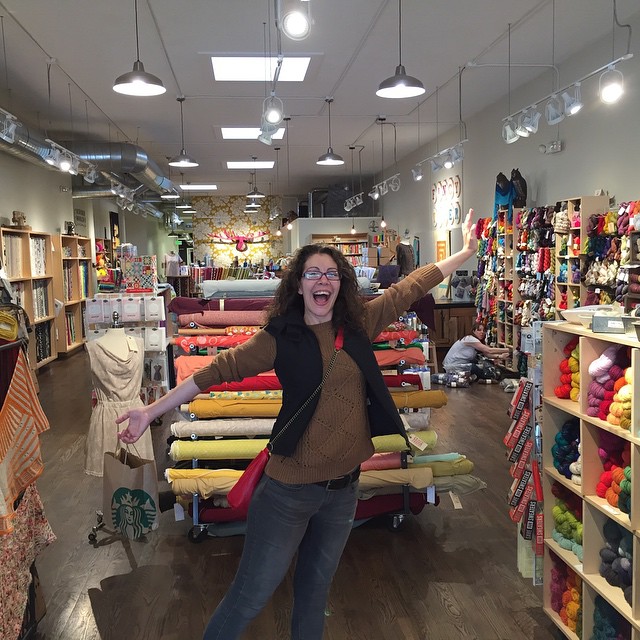 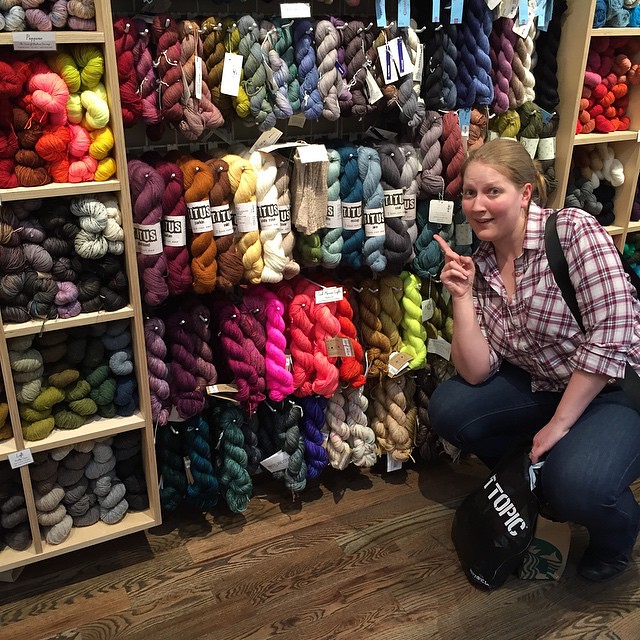 We got to the important mission of perusing fabric and yarn. 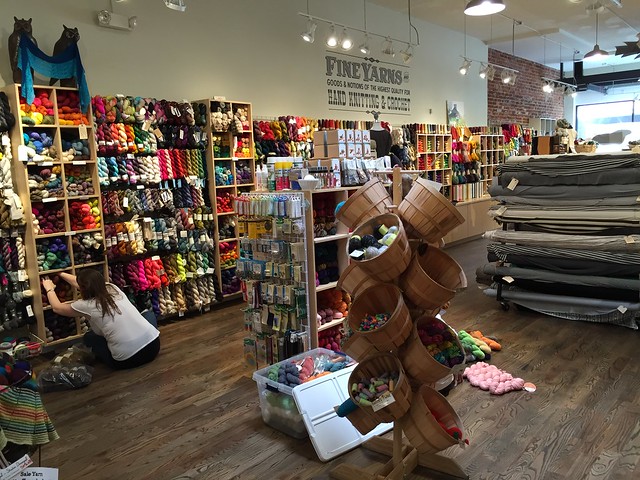 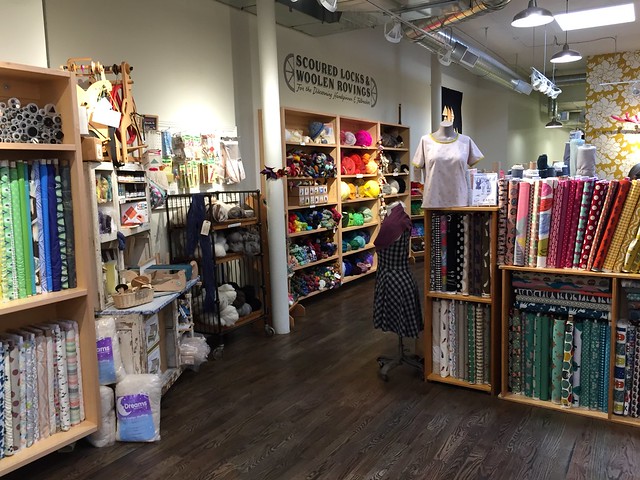 There were bicycles and moustaches… 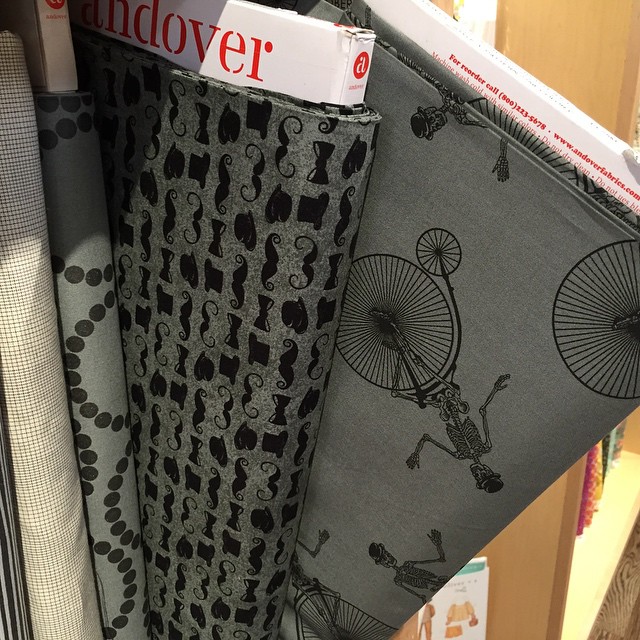 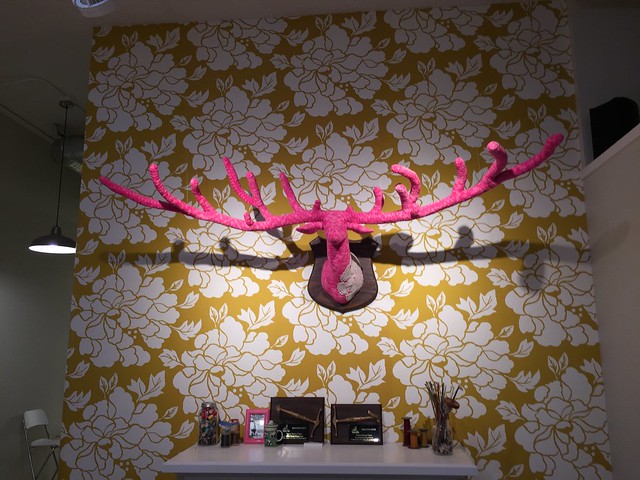 The most adorable needle-felted animals: 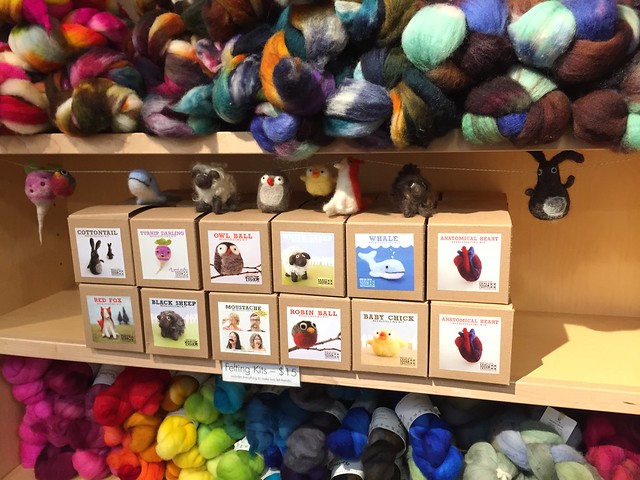 and loads more. This place is incredible! It’s impossible to capture the size and scale of it in a couple of photos, so I took some panoramas that show it a little better. Click on them to see them in a larger view!

So many beautiful things!

It wasn’t until I got home and began following the store on Instagram that I noticed the giant tiger that lurks in the back of the store. Can you spot it in the other pictures?

So, with all this wonderfulness available to me, what did I buy? No yarn – only fabric. I’ve made it a little goal of mine to buy fabric anytime I go somewhere special – so I can make a garment or an item further down the line that reminds me of my trip. Here’s my stash: 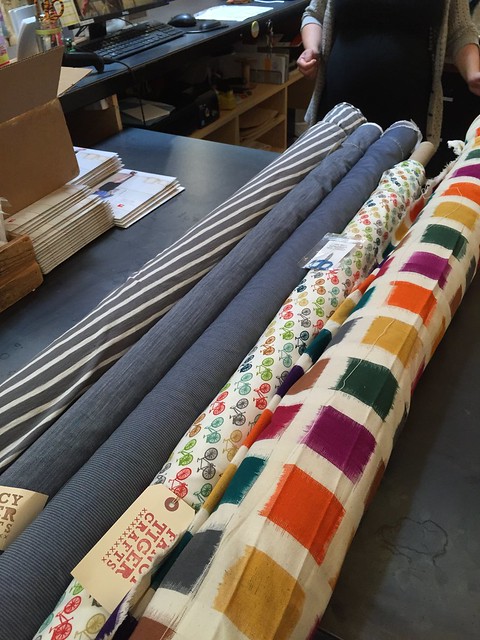 From left to right we have some beautifully soft grey and white striped jersey (hello Renfrews!), some Robert Kaufman chambray that seemed scandalously cheap compared to UK prices (one is more of a true chambray finish, the next one stripy, a thick knit fabric with BICYCLES and the most lovely heavy-weight cotton with these coloured blocks. This felt really spendy to me at $20 a yard – I only bought a single yard with the aim of making some cushion covers from it.

Let’s get a close-up of those bicycles because BIKES ARE AWESOME (as are the buses I saw in Denver that have bike racks right on the front of them – get on board with that idea, UK!): 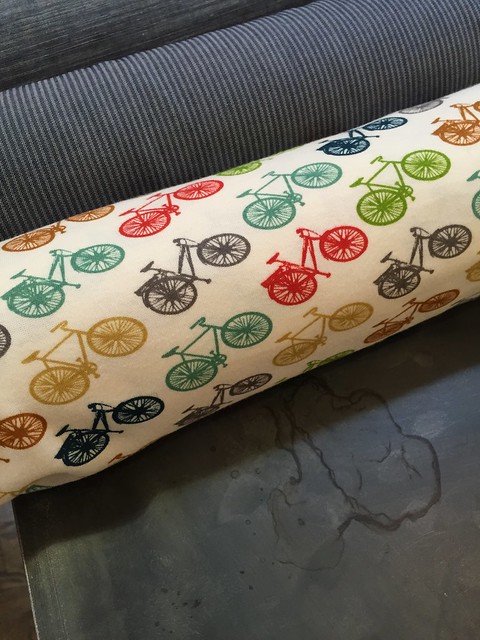 This brings us to November! I’m out of the melancholy phase because I have a job again (yay!) and I wanted to make something simple to help me enjoy sewing again as my last couple of projects had been so MEH. I made a quick trip to the market one lunchtime to find a suitable backing fabric as it became apparent my beautiful fabric wouldn’t be enough for 4 individual cushion panels of the size I wanted. T hit on the bright idea to just use the fancy fabric for the front – so backing fabric and two zips later, we were ready. 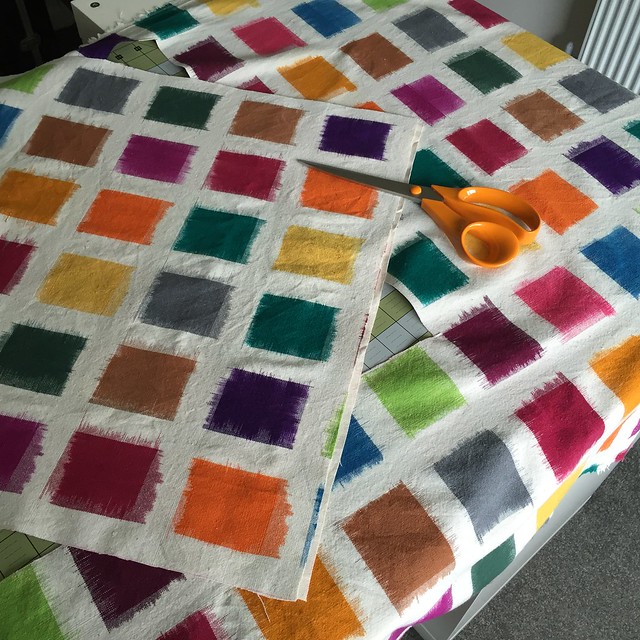 I used some cardboard to draw a perfect 20″ square (or 50cms) which was the same size as my cushion pad. The plan was to use a 1/2″ seam allowance all of the way round, making the cover smaller than the pad, resulting in a plump cushion. We bought some covers recently that are the same size as the pads and they don’t hold their shape as well. We wanted chunky cushions.

They were super straight-forward to do. Baste front and back pieces closed, with secure stitching for about 1″ at either end. I trimmed my zip to be less than 20″ long to make final steps easier. You then insert your zip, pick open the basting stitches and then whizz round the other three sizes before turning it right side out. Tadah! 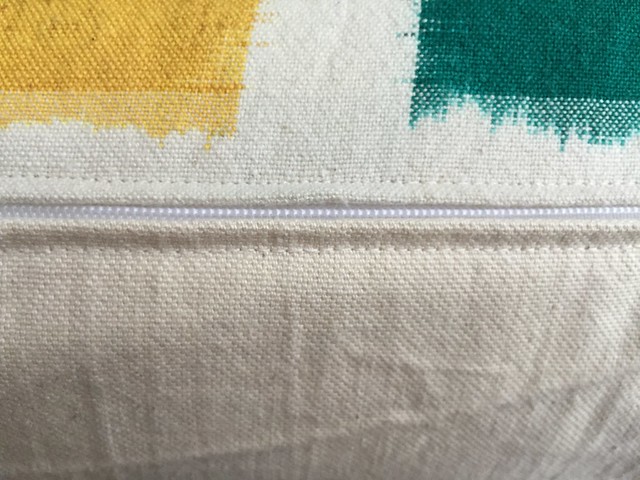 There’s a full tutorial that sums it up here. You should also finish your edges as you go, which I didn’t on the first one.

And voila – a cushion! 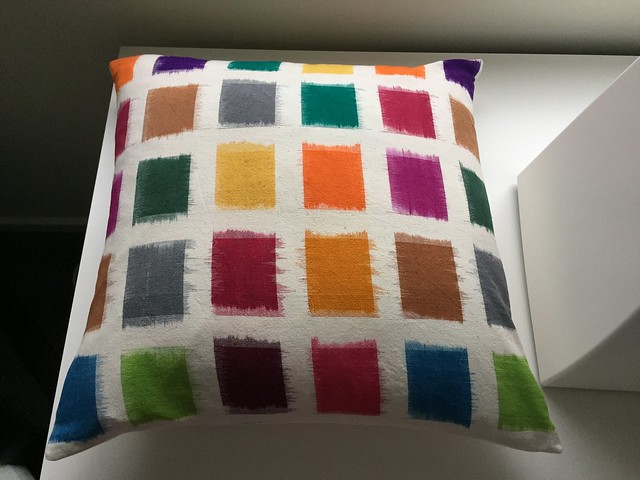 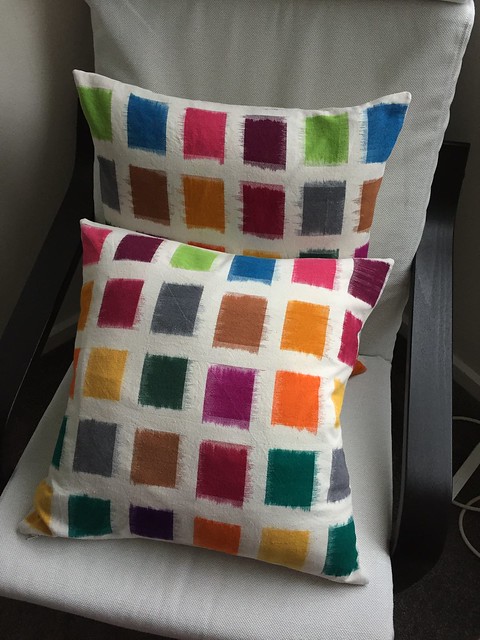 I will at this point confess to being a little peeved at my cutting out – there’s not enough blue in them for me. They’re a little too dark and purpley/brown – but this is me being super picky. Overall I should be really pleased – and I am!

We still haven’t decided where to put them for now. At present they’re on the chairs in the studio, but they have to be moved to sit on the chairs as they’re a little too chunky (oh the irony). They work brilliantly on the Poang chair, so one of them could live there (although the chair has since moved rooms): 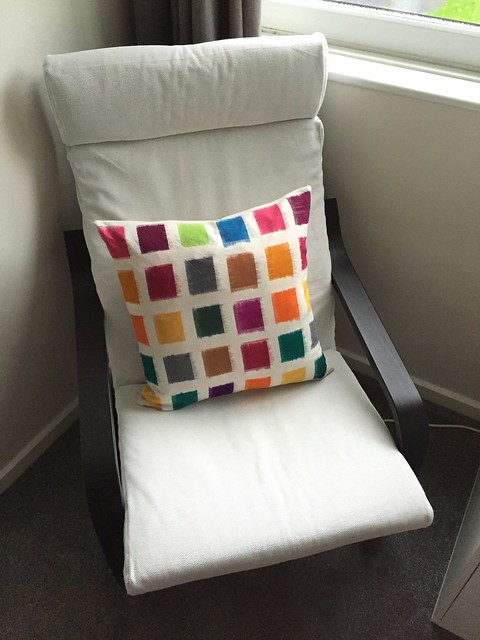 They also look pretty awesome on the sofa (you can see the uninspiring too-large cover next to it): 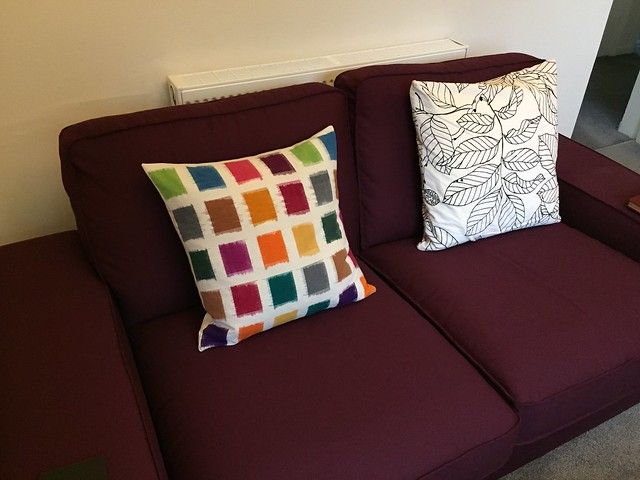 Who knows! I have grand plans to get a bright yellow IKEA Strandmon chair like this one for the lounge and I think one of them would look BRILLIANT on it: 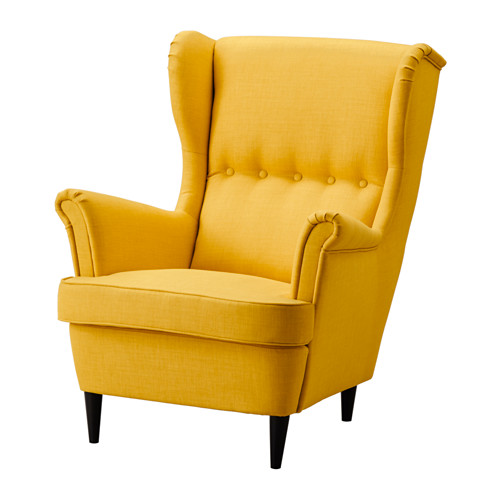 So we’ll see! I have some fabric left and some backing too – I need to see if it’s enough to create a seat pad for the shoe unit in the hallway. It’s one of those benches with room for shoes on rails underneath. In our old place we used to have a cushion on it, but our hallway here is too narrow, so a seat pad would be better. I have the foam pad already – I just need to cut it to size and get covering. Hopefully there’s be enough left!

In total (excluding cutting out) these took me less than an hour – it was really nice to have a project be completed so quickly and come out so well! I’ll certainly make more things for the home now (particularly now I’ve got an overlocker – more on that another time) and fingers crossed the seat pad comes out well. It made me feel a little better about my sewing ability after what felt like one disaster after another. It helps remind me that it’s not all bad and sometimes it’s even pretty damned good!

What have you been making recently?

One thought on “Cushions!”