I’ve discovered that one of the things I really enjoy making is shirts. Despite my reservations about my Grainline Archer (not the pattern itself, but rather its suitability for my figure) and the problems I had with the collar, there’s something so satisfying about getting to the end of the sewing, attaching the buttons and having a SHIRT. It seems like one of the pinnacles of garment making. Once I crack jeans, coats and tailoring, there’ll be nothing left to learn 😉

I’ve previously made a couple of Negroni shirts for Trev (here and here), but they were very casual styles with a camp collar. He was after something a little more traditional – i.e. a shirt with a collar and stand. Enter McCalls 6044! 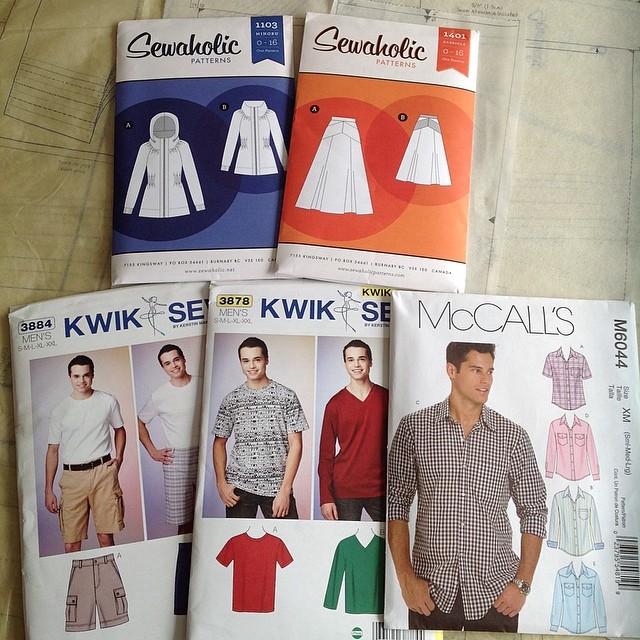 This pattern has a few elements that didn’t quite make it the perfect pattern for what Trev wanted. The sleeve was a 2-piece on the long sleeved version, which was something I could get over. The main issue was with the yoke. The only version of the pattern which included a yoke was a Western-style shirt and as such the yoke and back pieces were curved. To fix this, I traced both the yoke and back pieces as per the pattern, but then I folded them both over at the bottom and top edges respectively, just to straighten things out.

If I recall correctly, I actually finished this shirt around the end of April/early May but Trev wore it so much straight away that I couldn’t get him to stand still to allow me to take pictures of it. EVENTUALLY, in September (many washes and a touch of fading later), here we are: 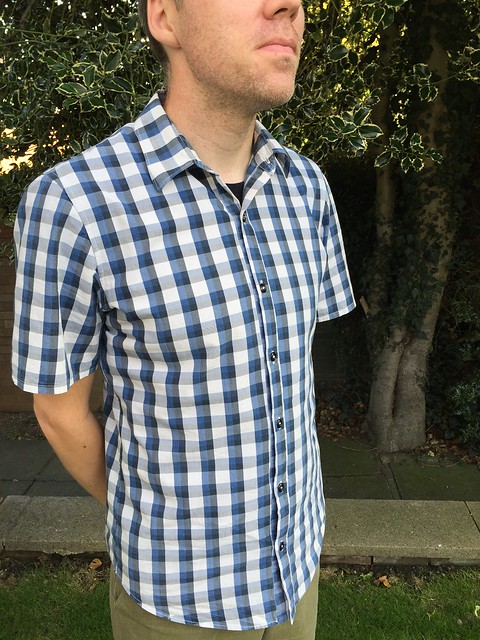 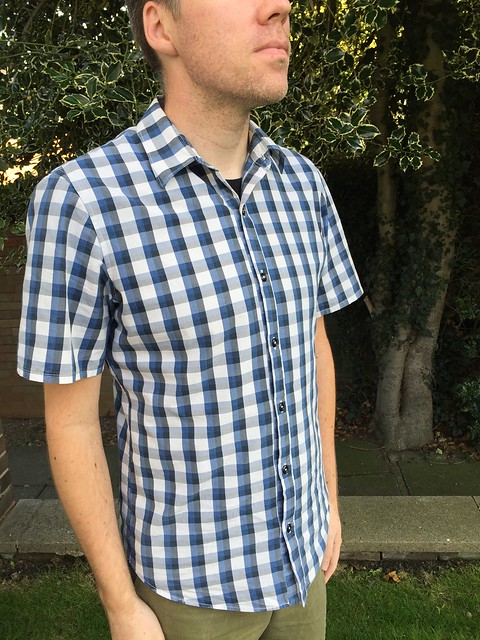 I cut a straight size medium – the only part which is perhaps a little big is the sleeve openings – Trev feels they’re a little voluminous, but without messing with the armholes or giving the sleeves a weird shape, I don’t know how to fix that. Besides, I still think they look pretty good! 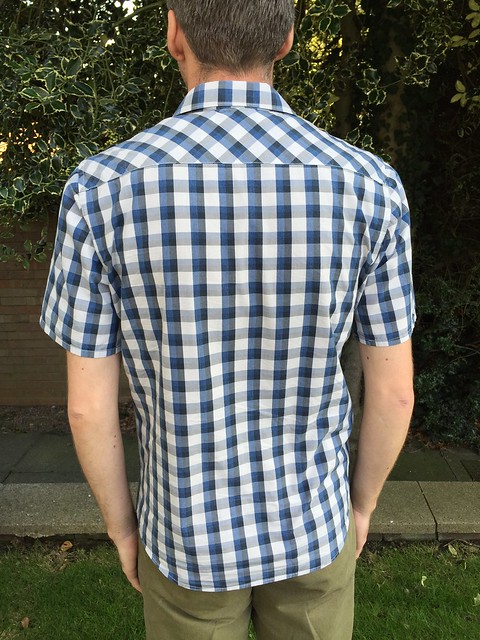 You can see the changes I made to the yoke here – if I hadn’t flattened out the edges, the yoke would have curved down into a point at the centre-back and that’s not a look T likes (he detests country music, so any sort of western slant would not have been acceptable!). There’s some tolerable pattern matching – from the collar down into the back the stripes align. The diagonal cut of the yoke also lines up nicely with the centre of the back. 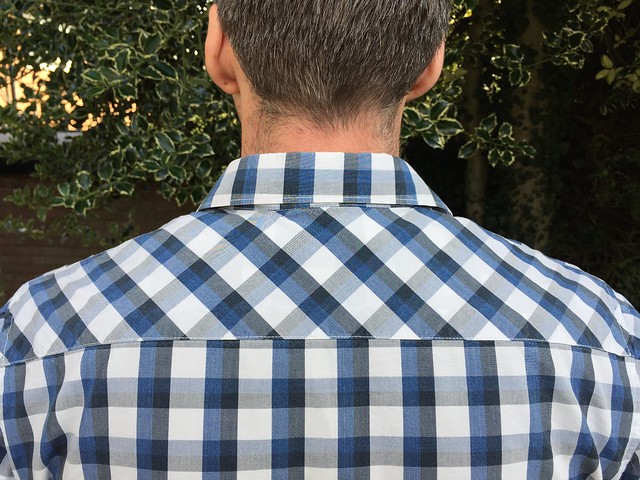 Now onto my nemesis – the collar! I moved away from the method in the pattern to using the Four Square Walls method of assembling things in a different order. It’s proven much more successful – other than the bit peeking out where the buttonband joins the collar, it went together easily and looks very neat. 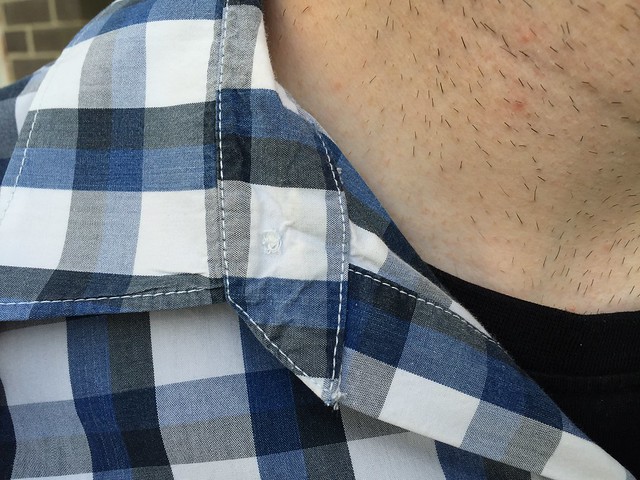 Other than woeful top button placement, it looks pretty good from the outside too! 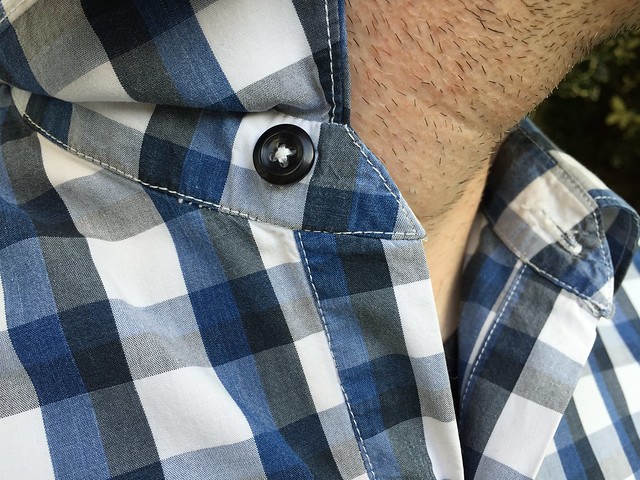 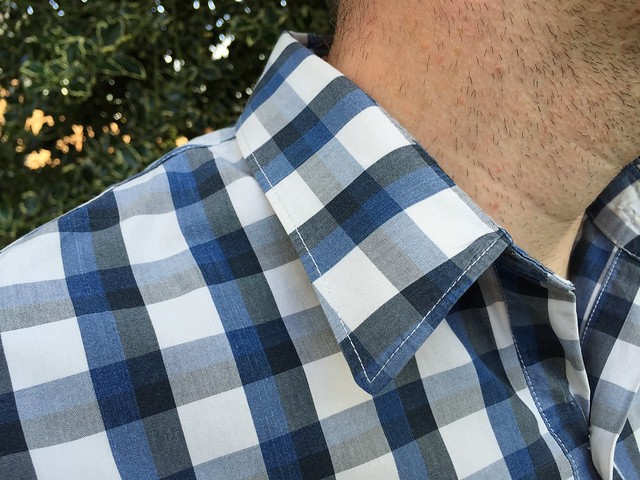 All of the topstitching was done with the stitch-in-the-ditch foot on my Janome 525S – it’s one of those feet with the metal blade and combining that with moving the needle away from the centre resulted in fairly even topstitching. 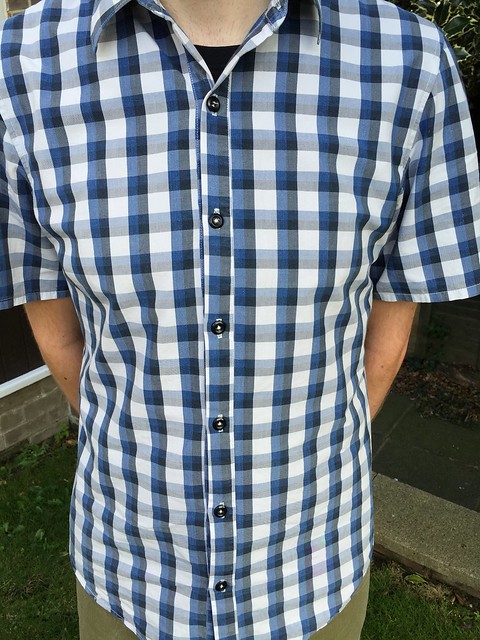 Flat-felled seams – like on the Archer, I flat-felled all sleeve and side seams for a lovely clean finish: 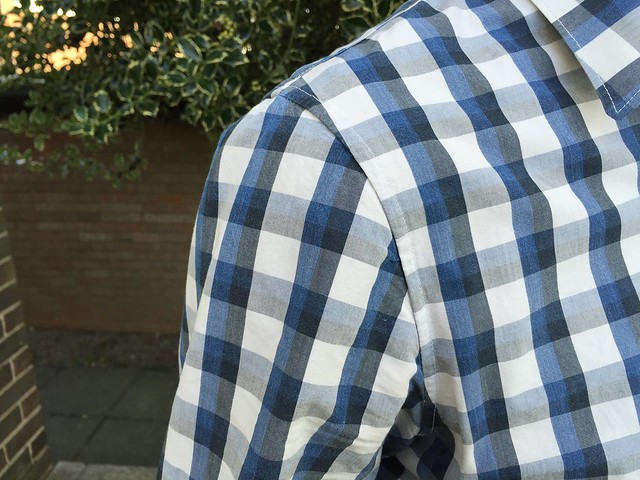 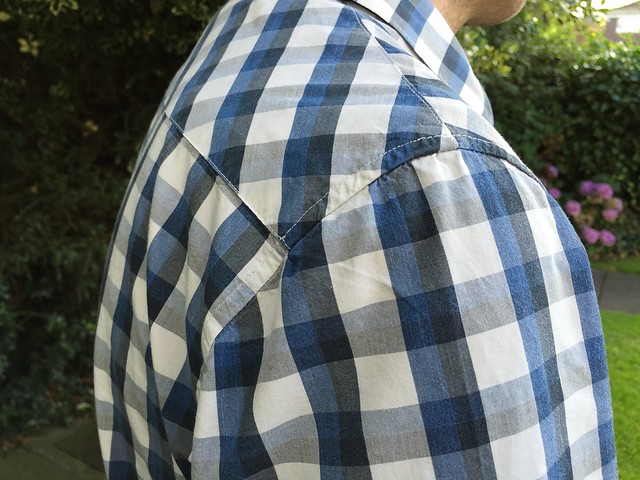 So there we have it!

That puppy was just a warm-up for the main event! I don’t think there’s anything Trev loves quite so much in his wardrobe as a long-sleeved smart/casual shirt.

When I began sewing this one, I got to the point of attaching the pocket and thought, “YES!”. This is AWESOME. 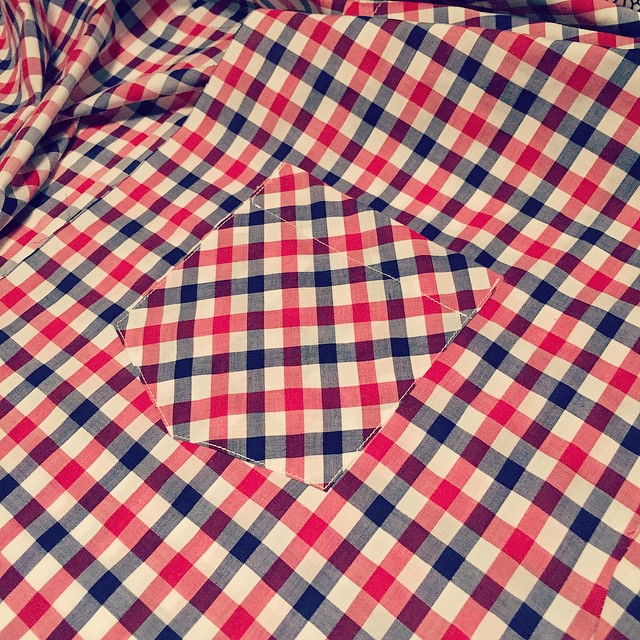 There’s something oh-so-nice about feeling a sewing project start to come together. This second shirt went together very easily – being almost identical to the first. The only difference is that on the long-sleeved shirt the sleeve was in two pieces, so I need to sew these first before setting the sleeve in. On reflection, I should have flat-felled the sleeve seam as it wouldn’t have caused any issues with doing the placket, but that’s something to do for next time. 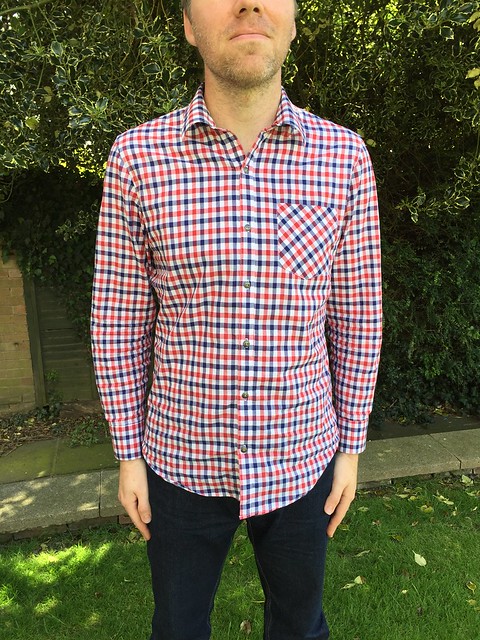 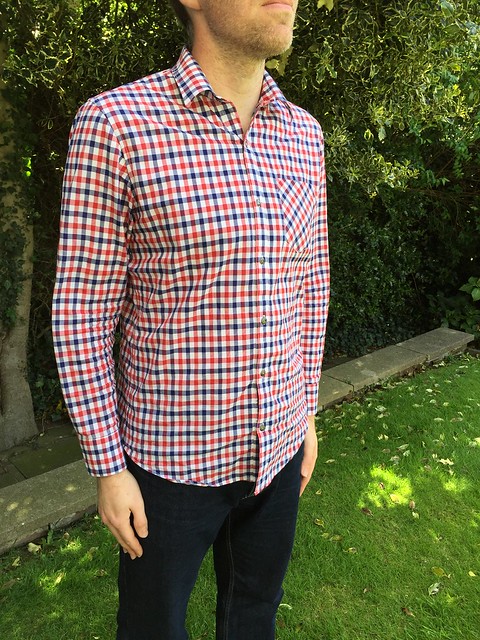 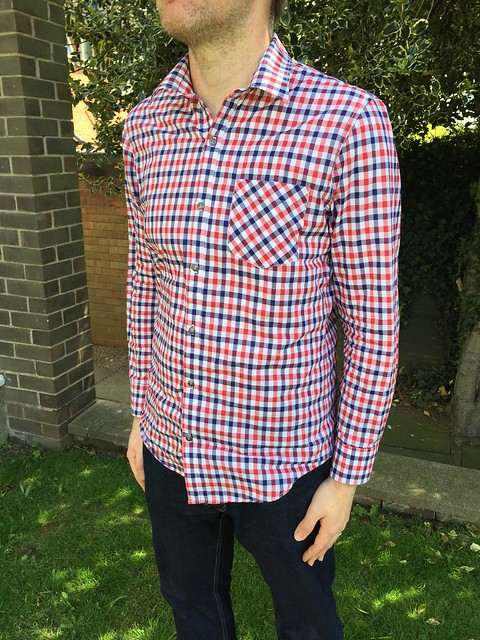 I’m so pleased by how this came together – I think it certainly looks like something you could buy in a shop and Trev is super happy with the fit. As usual, I cut the yoke on the diagonal: 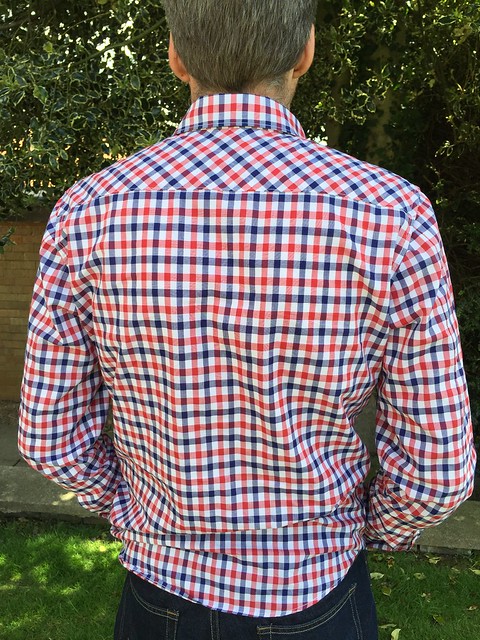 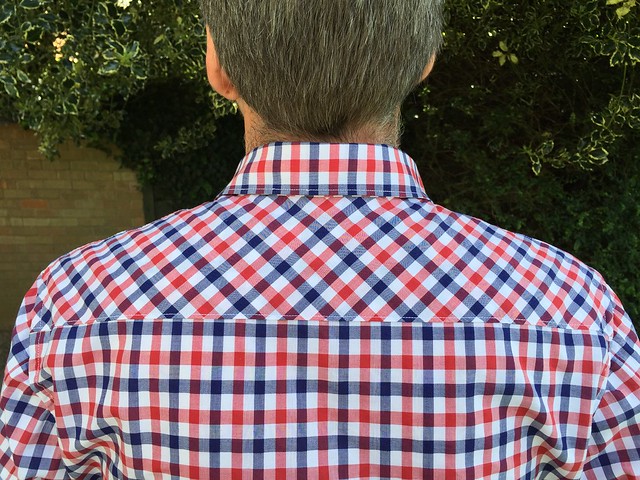 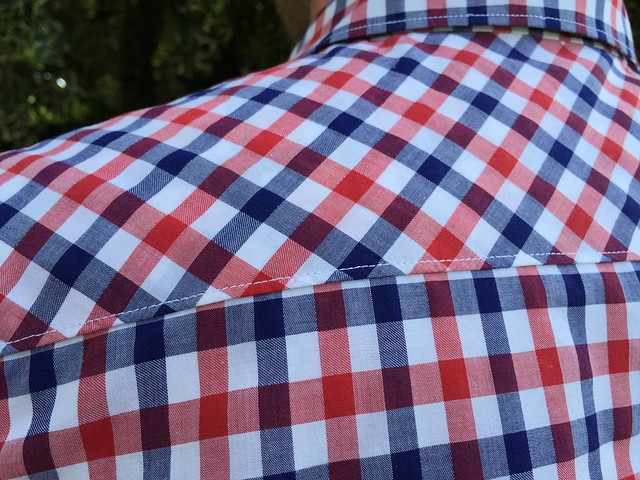 Here’s the two-piece sleeve – pretty good pattern matching down the seam. I have to confess I’m not a fan of them. I’m sure they’re good for fabric saving if you’re not using a patterned fabric, but with a plaid like this, it just seems like extra hassle. The shirt I’ve made Trev most recently (unblogged), also from this pattern also has the two-piece sleeve, but I won’t bother with it again. Next time, I’ll trace them out again as a single piece and just make it easier on myself! 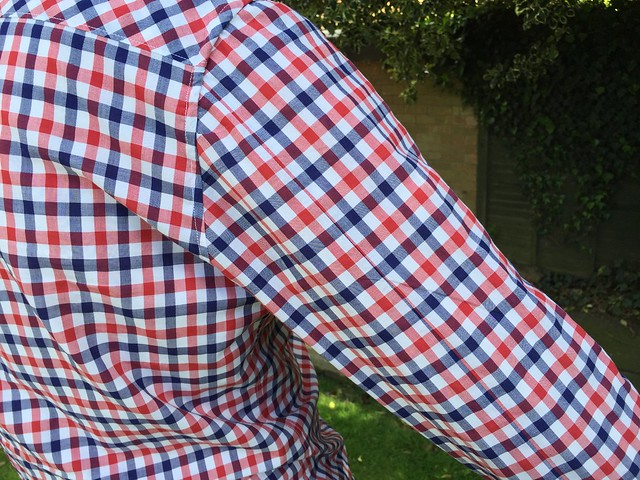 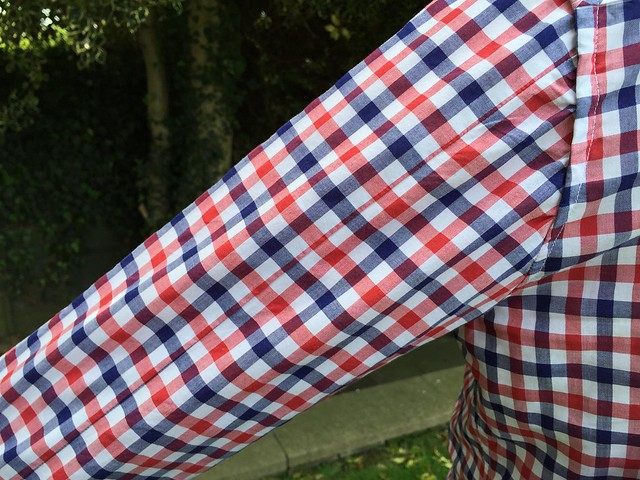 Once, again, all seams flat-felled throughout (with some good pattern matching too): 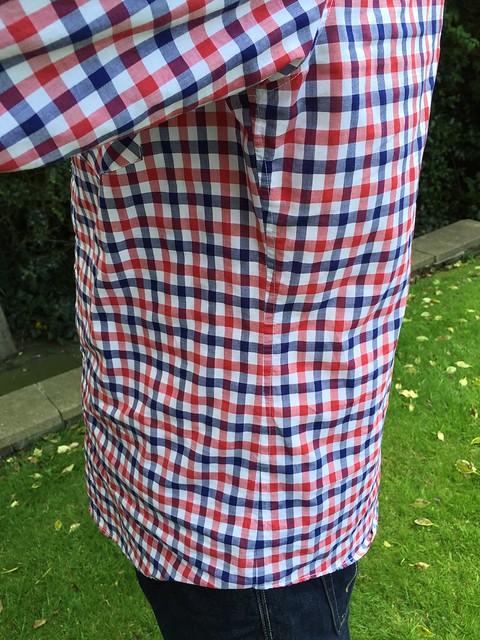 The buttonband doesn’t quite line up perfectly, but it works really well with some buttons we salvaged from another old shirt and is set off nicely by the pocket on the diagonal: 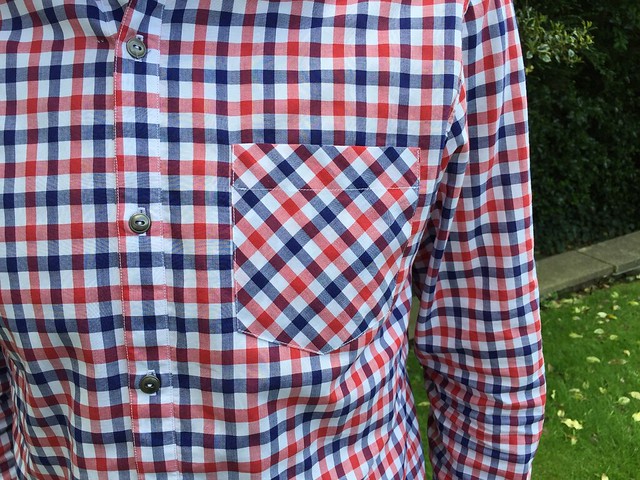 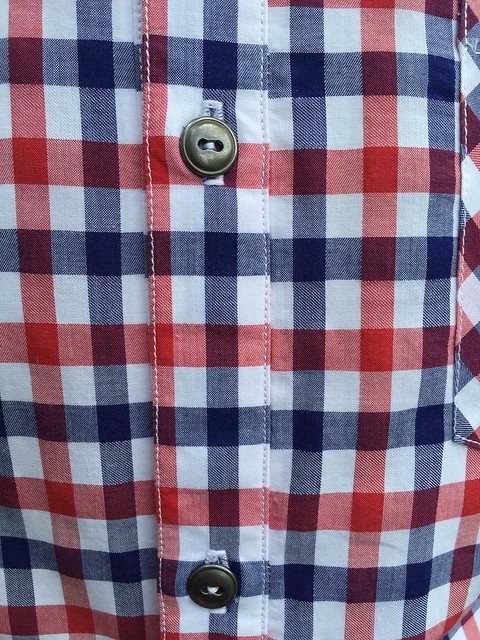 The collar looks even better this time too – I think next time I need to fold the seam allowances under a little more as there’s still something poking out on the inside at the bottom of the collar stand: 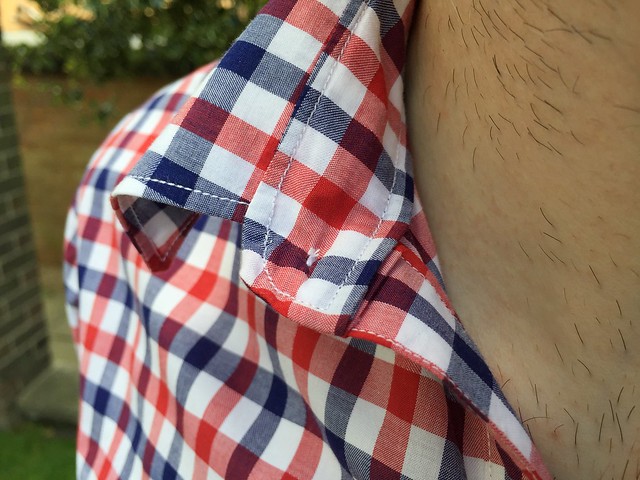 I still can’t get button placement right at the very top! :’D 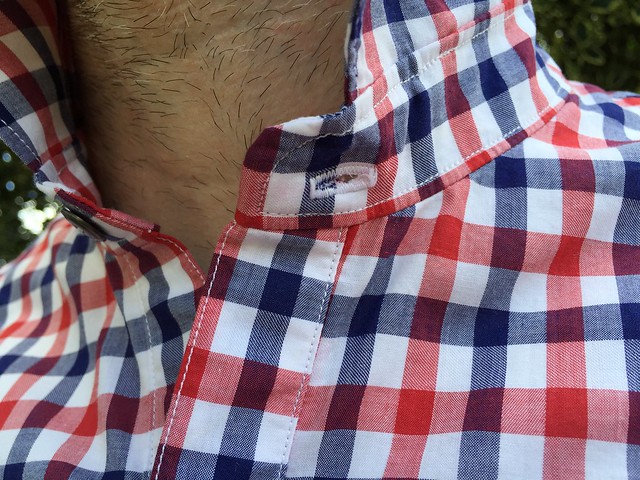 The other side looks pretty damn good – although potentially I need to topstitch closer to the edging: 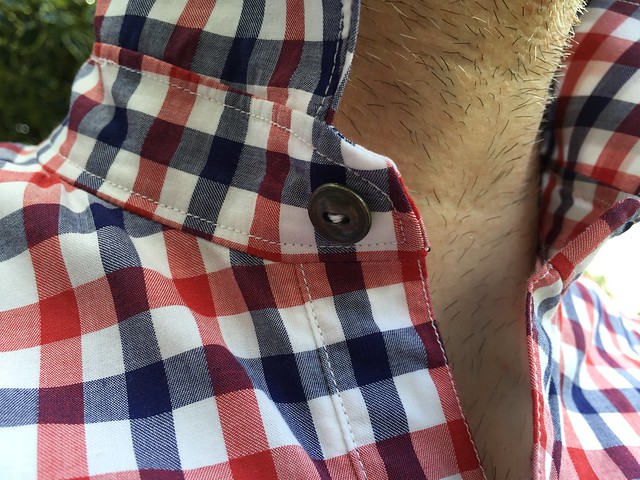 Cuffs! This shirt has the continuous placket kind, similar to what I used on the Archer Shirt. On the most recent shirt I’ve tried installing a tower placket, with mixed results, but although simple, these ones do work well. 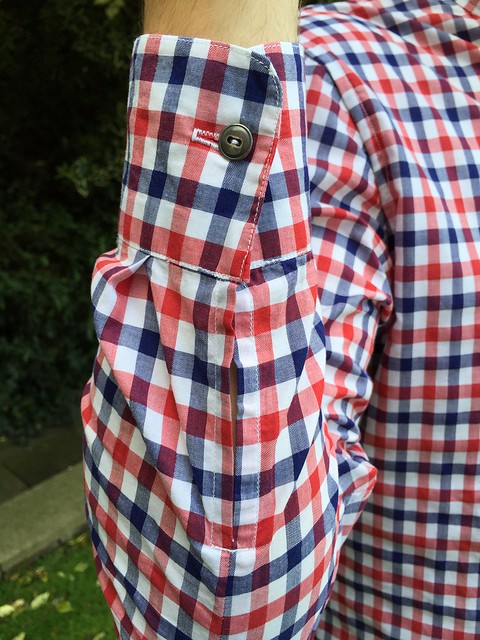 Teamed with a pair of dark blue jeans and boots, he’s all set! I really enjoy Trev’s shirts as he’s basically a rectangle – fitting is easier and there’s much less needed in the way of adjustments. Watching come together from about 15 individual pieces into a single garment is so satisfying. In time, I’d like to attempt more formal shirts – with points in at the collar edges and more involved plackets and cuffs. 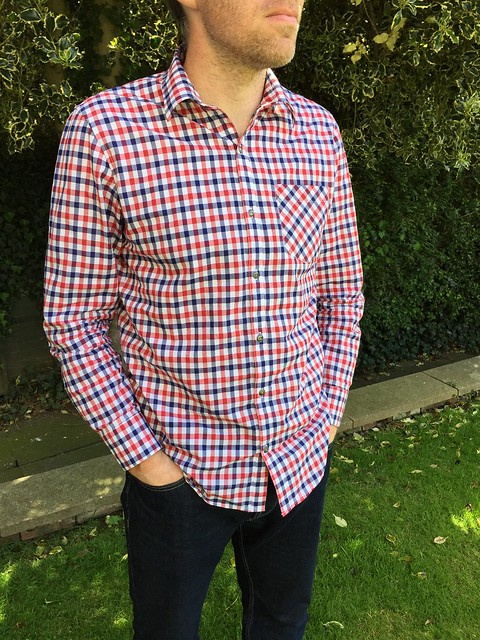 I’ve learned a lot from the ones I’ve made so far and I’m looking forward to applying them to the next shirt I make for myself – which will be most likely the Sewaholic Granville although I also have the Oakridge Blouse and Butterick 5526 in my stash. The Oakridge needs a lighter weight fabric I think, with a lot of drape, whereas the Granville can be made from a more structured fabric. The Butterick I may attempt later on – given that the view I’m most interested in features princess seams and I haven’t learned how to adjust those for an FBA yet. The Granville uses a single dart and so is more straight-forward (she says – no doubt naively!)

It’s nice to do a catch-up of unblogged makes – there’s lots still to post and even more unmade that I need to get around to at some point. I had a bit of a whoopsie with the shopping cat at Fabworks on Thursday, but at least I’ve organised my stash in the last few weeks so it’s all neatly folded. This weekend I’m trying to catalogue it all – adding swatches to index cards and creating a Trello board to track all of my fabric and patterns. Needless to say, my inner geek is so very happy at the moment 🙂

2 thoughts on “A Surplus of Shirts”